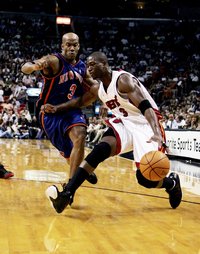 Two years from now, all (free agent) hell will break loose. As you might have already heard, the summer of 2010 is kind of a big deal. Apparently there’s a guy from Ohio who will have to make a rather important decision regarding his (and the League’s) future.

While most of the focus will understandably remain on which jersey LeBron will be wearing two years from now, it’s important not to forget about the guy in Miami.

In 2010, Dwyane Wade will also be one of the megastars on the free agent market, and according to the Heat guard, he wouldn’t mind playing for Mike D’Antoni. From Newsday:

“I mean, I love offense. Why wouldn’t I?” Wade said during a promotional trip to the NBA Store. “I love him. When we’re in practice, I love Nate McMillan, but I want to be on Mike D’Antoni’s team because Nate is preaching all defense and Mike is preaching all offense.”

“He’s a great coach. He’s unbelievable. He’s a very smart coach, especially offensively. He’s got a tough job on his hands, not just because of the team he has but because of the city he’s in. But I think if anybody can do it, he’s one of the guys that can do it. You’ve just got to have patience. And I think he’ll have patience.”