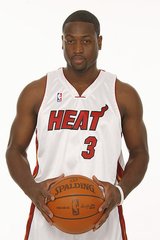 Want to know just how great of a basketball player Dwyane Wade is? Or more precisely, how great Wade is expected to be night in and night out? Dude is averaging a shade under 27 points, 5 boards and 6 assists per game. Those numbers are considered a disappointment.

That’s how high D-Wade has set the bar (and expectations).

Prior to last night’s win against Orlando, Miami Heat president critiqued his superstar’s game, citing possible issues with Dwyane’s conditioning as reason for the drop-off in efficiency from last season.

Riley said Wednesday the team plans to address some concerns about Dwyane Wade’s conditioning that might be a factor in the guard’s drop-off in production from last season.

“He’s not there right now,” Riley said. “So I get out of my president’s chair and into my coaching chair — I know he’ll probably say I’m nitpicking. His efficiency is down. We’ll address what it is we can do to help you maintain that lean, mean scoring machine you were a year ago.”

Dwyane Wade, who’s shooting an unsightly 43% from the field, says his legs aren’t quite there yet. This is understandably a letdown for the team (which is also struggling), after experiencing the best season of Wade’s career, in which he led the NBA in scoring.

As far as Stan Van Gundy is concerned, though, this is all much ado about nothing. SVG maintains that D-Wade’s numbers by season’s end will be spectacular as always. He may be right, but for now, Wade’s employer and the fans are unhappy.

The life of a superstar.