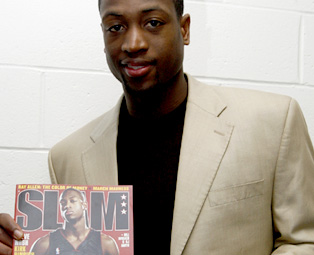 I wrote about the NFL’s return to New Orleans yesterday for SI.com, but if I was writing something today it would be about how the Falcons rolled over and played possum (to use a Southern phrase) for the Saints yesterday. Talk about ruining my night.

Still not much news out there…

• Sam Ashaolu had a bullet fragment removed from his head yesterday, but he still has three fragments embedded in his head and his recovery still has a way to go. I spoke to Sam’s brother Olu on Saturday, and Olu told me the family is staying grounded but they are encouraged by his improvement thus far. The family has set up a website here to keep people updated and raise funds for Sam’s medical bills.

• Converse brought in Spike Lee to direct the new Dwyane Wade commercial. According to the Miami Herald, the ad is “shot documentary style.” Hopefully Spike Lee goes behind the scenes and exposes the conspiracy that led to Wade shooting billions of free throws during the NBA Finals.

• He’s ba-ack. Rick Brunson has signed a one-year deal with the Sixers, for what will be his 10th NBA season. The Sixers are also bringing in Steven Smith, quite frankly.

• The MCI Center, home of the Washington Wizards, announced that fans will no longer be allowed to bring in their own food and drink into the arena. “We realized that we could rip off the fans for even more money by forcing them to eat our wildly overpriced corporate food,” a spokesman didn’t say.

• The Christies aren’t welcome back to Seattle.