D-Wade Will Bring the Anger to Beijing 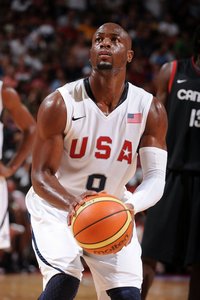 The Olympics are, in theory, about the capacity for humans to put aside their economic, political, and social-cultural differences and come together in the name of athletic competition. Not for Dwyane Wade they’re not; Wade has rage burning within him, and he’s in a take-no-prisoners kind of mood.

“That’s going to be like that probably all year, for a while, just that anger, that focus of getting back to total respect,” he said this morning by phone before joining his Olympic teammates at practice in Macau, China.

“Any doubt that people have in their mind about you as a player, you want to erase it. Just like it was when I first came in the league, I played angry. So it’s the same kind of feeling on the court.”

No word yet on whether or not D-Wade is going to bring his costume of The Hulk to Beijing.

Bold guarantees and seething anger. Hmm. It’s almost as if Team USA is taking these next few weeks seriously or something.