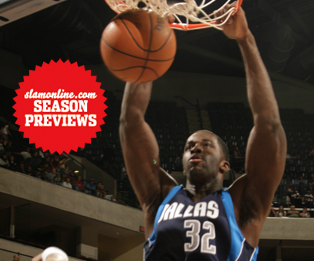 The Dallas Mavericks kick-off our Southwest Division previews. You can read past previews here.

Dallas loves drama. Take a look at any of the sports franchises located there. You have the Cowboys, ‘America’s Team,’ with the posterboy quarterback and his superstar girlfriend, enough talent to beat the AFC Pro Bowl squad but a rap sheet that would make the early 2000’s Jailblazers

blush. Then you have the Texas Rangers, whose greatest player ever, Nolan Ryan, was so great that they vowed to never sign another major league caliber pitcher ever again in his memory.

Oh yeah, Dubya owned them while Jose Canseco was there at the beginning of the Steroids Era. What’s not to love? Even the Stars are jumping on the controversy train with there pick up of Sean Avery one of the dirtiest players in a sport that allows you to punch people in the face while also being a women’s fashion nut (yes, as in he knows about purses and stuff). As if those teams didn’t give Metroplex sports fans enough reasons to have more extreme highs followed by sickening lows than your friendly neighborhood coke addict you have the Dallas John Mc…err, Mavericks! (Sorry, word association is a b*tch.)

The only way I can really describe the clusterf*ck that is Mavs basketball this year is to compare some of its players to one of my favorite stories as a young tike, The Wizard of Oz.

Playing the role of the Tin Man, we have none other than one of the games greatest point guards of all time Jason Kidd. You know who else is one of the greatest point guards of all time? Bob Cousy, but the difference is he isn’t starting for a team this year who, if you believe the b.s. Mark Cuban is slinging, has championship aspirations. Now don’t get the comparisons twisted as far as the tin man is concerned. Jason has plenty of heart; it’s new knees he so desperately needs. With his roasting by CP3 in the playoffs last year and his ridiculously horrible defense in the five minutes he was on the floor in the Olympic games, it’s obvious a little oil on the ol’ nuts and bolts isn’t going to do the trick going against the Barbosas, Williams, and Pauls of the Western Conference on a nightly basis. And I don’t know what a Berea is, but it’s not the answer. Jason will still make smart passes and throw a beautiful oop to Josh Howard or Gerald Green, but the Jason Kidd we grew up loving is dead and gone. Or at least his ability to slide his feet and stay in front of an opposing guard is.

The next character we have is J-Ho playing the role of the scarecrow obviously enough. Now for those of you who may not be familiar with the storyline the scarecrow wanted to ask the Wizard for a brain and judging by Josh’s decision-making ability over the past year, I’d say he could use a little more between the ears as well. Now don’t stereotype me as another Fox Sports-type journalist who wants to burn down Josh’s home and have an old fashioned lynching for a couple of terribly regrettable statements. I have less of a problem with the things he’s said and more of a problem with the way he let those opinions become public. If Josh can realize Mark Cuban is dispersing of young talent to build around him, then Howard has the ability to be a 20/7/5 guy next season. But considering he’s still bitter over the fact they got rid of Marquis Daniels not to mention Dash, I’d say the odds that he’s shipped out of Dallas by the trade deadline are fifty-fifty.

This brings us to the always controversial assessment of Dirk Nowitzki’s contribution to the organization. He has put up great scoring numbers for years with his incredible skill set, and he has an MVP trophy to show for it. The problem that fans have with the Diggler is in the most important moments–the ‘06 Finals, the first round series against Golden State, the moment David West love tapped his face on national TV–he seems to lose his mean streak that he seems to have at during the regular season. Because of that, Dirk gets to carry the Lion Label–in need of large dose of courage. If Rick Carlisle can somehow unleash the same Dirk who played in the ‘06 Western Conference Finals, look out. But with his performance recently, the odds are Khalid will still be writing ‘Dirk Sucks’ in the comment section in December without much of an argument.

The wild cards, and possibly the players with the most promise on this roster (who haven’t said something stupid on YouTube), are Jason Terry, Brandon Bass and Gerald Green. Jason has been one of the more consistent players over the past few seasons for Dallas. The Jet has all the tools to be a consistent threat as a combo guard but it will be interesting how he meshes with Kidd during a full year. Brandon has an always developing post game and a decent midrange shot that seems to get better game-by-game. If he’s given enough minutes, he could be the one player who gives Josh Howard hope for in the D. Another player who could give J-Ho a reason to stick around is the aforementioned Mr. Green. Gerald has had All-Star athleticism since high school but, unfortunately, seems not to have worked on his game since then either. Maybe he could learn something from fellow swingman Jerry Stackhouse who is a year older but a former scoring machine. Eric Dampier is not to be mentioned as having a positive effect for the Mavs until his contract year. It’s in his contract.

All in all, as much as I’ve used fairytale analogies in this preview, I just don’t see a happy ending for Dallas. It’s hard to see where they’ve gotten better, and firing Avery Johnson seemed like a desperate attempt at finding a scapegoat. Especially after Cuban hired the vanilla and less annoying voiced version of the Little General, Rick Carlisle. My fearless prediction puts the Mavs in a battle with the Clips for that eighth playoff spot. They’ll get it, but only to experience a Laker sweep a week later. Another mediocre year and Dallas fans may be hoping for a house to fall on Cubes.