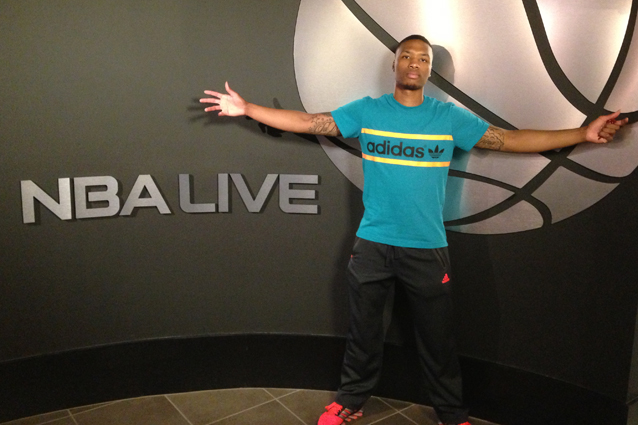 Damian Lillard’s last 12 months have been pretty great. Think about it: This time one year ago he was a soon-to-be-rookie point guard with a boatload of potential and plenty of playing time awaiting him in Portland. Now, 365 days later, we’ve seen the Bay Area native take full advantage of said playing time, averaging 19 points and 6.5 dimes per tilt and snatching the Rookie of the Year trophy for the fourth time in PDX’s history. He’s spent the current offseason traveling the world, tweaking his game and preparing for what should be an excellent sophomore campaign, considering his personal improvement and the franchise’s additions of veteran Mo Williams and rookie CJ McCollum could/should result in a trip to the 2014 Playoffs. So, yeah: Not too shabby. During a busy day at the EA Sports headquarters in Orlando, FL, the Trail Blazers PG spoke with us about NBA Live 14, what he’s been working on this summer and why wax museums are creepy as hell. (They really are.)

Damian Lillard: It’s going pretty well. I just got done in the motion capture studio, doing some stuff. It was cool.

SLAM: Was that your first mocap experience?

DL: Yeah, that was my first time. I had seen it a few times, but that was my first [participating]. It was cool. I had a whole bunch of stuff strapped to me and my hands covered in tape, so at first it was kind of weird, but it ended up being pretty cool. My hands got warmed up to it, got comfortable with [the tape] on there. I was able to handle the ball, was able to make shots. I just had fun with it. I played the game like I was working out.

SLAM: You gotta make shots, because if you miss them they’ll translate that right into the game.

DL: Exactly. I told them every time I do a move, I gotta end on a make or it don’t count.

SLAM: Are you excited to see NBA Live return?

DL: Yeah, I am. I was a fan of it as a kid—that was the game I played. It kinda went away for a minute but I’m excited to see what they bring to the table.

SLAM: Do you bring a vide game console on the road to play with teammates?

DL: I have brought it on the road, but I don’t play with anybody.

SLAM: I was wondering who the best is amongst your teammates.

DL: I know they play each other all the time, but I really couldn’t tell you who the best was because I don’t play [with them].

SLAM: What have you been up to this summer?

DL: I’ve been traveling a lot, doing stuff through the NBA, through adidas. Other than that I’ve just been working out.

SLAM: When you watch game film, is there anything specific you see that you want to improve on this summer?

DL: Probably one of the main things is just different floaters and little jump-hook shots in the paint instead of challenging the bigs every time, because I got beat up a little bit over the course of the season just from attacking the rim so much. There were a lot of times when I could’ve just stopped short of the rim and just shot a floater over the top of them. Coming across the paint, shooting more jump-hooks, I could’ve took a lot of that pounding off of my body had I had those shots last season.

SLAM: Is there anyone specific who you want to steal moves from?

DL: In the League right now, I think Derrick Rose. He’s an explosive athlete and he attacks the rim, and I like to attack the rim, but he has that floater in his game. I think I need to develop it. Baron Davis is another guy who I loved to watch play growing up, and I’ve been talking to him about different ways to be more crafty with the ball. Hopefully I’ll be better next season.

SLAM: Have you gotten in the gym with Baron, or just spoken with him?

DL: It’s just been conversations, but we’re gonna get together soon.

SLAM: I heard you were planning to train with Gary Payton.

DL: That’s the plan. I know he just got a new job, so it’ll be tough on him with time, but hopefully we’ll get it done.

SLAM: You had an interesting tweet about young players placing too much value on getting buckets. What inspired that?

DL: There’s a lot of younger guys from Oakland, from my area, guys that are in college that I follow on Twitter, and they’re always talking about getting buckets. I kinda got a little bit irritated, because there are some guys—their team needs them to get buckets, but everybody can’t get buckets. So I was just like, How are you valuable if your team doesn’t need you to get buckets? What are you gonna do?

SLAM: Is that something you picked up during your rookie year?

DL: I mean, I realized that in college. But I’ve always kind of been in a role when my team needed me to get buckets. But at the same time, I know that if I ended up on a team where they didn’t need me to, I’d still be a valuable player. So that’s something that I wanted to put out there.

SLAM: What was your reaction to the Blazers signing Mo Williams?

DL: I thought that was a good pick-up. He’s a veteran point guard. He’s been on successful Playoff teams, he’s been on bad teams and he’s been around the League. There’s a lot that I can learn from him and I can benefit from having him on the team with me.

SLAM: Shabazz Muhammad said he’s wearing No. 0 this year because no one else does—but you and a bunch of other guys wear 0.

DL: I don’t even know if he meant to say that [laughs]. Russell Westbrook, who’s I think a three-time All-Star, wears No. 0. I was just the Rookie of the Year and I wear 0. There’s a lot of guys that wear No. 0. Jeff Teague wears No. 0.

SLAM: When you came into the NBA, why’d you decide to go with 0?

DL: ‘Cause I’m from Oakland, I went to school in Ogden [UT] and now I’m playing in Oregon—so it was more about the O.

SLAM: I was Googling around a little before this interview and I came across a piece about your fear of statues and a bad experience you had at a wax museum. What was the story behind that?

DL: I’ve always been kind of, like, when I see statues of Jesus and stuff like that, I’m not scared of them, but it just gives me a funny feeling.

SLAM: They creep you out.

DL: Yeah. So when I was in this wax museum, I went through and there were actresses, actors, different rappers and singers and stuff like that. They had different athletes. I was cool, I was fine. And then I got to a room and it was like Abraham Lincoln, George Washington, Martin Luther King, Jr, Oprah Winfrey, Barack Obama and all these icons. They were playing that music. I forget what kind of music it was, but it was dramatic music. I just looked around and felt like all eyes were on me, so I had to get out of there. That was crazy, man.

SLAM: So that was your last wax museum experience.

DL: I wouldn’t mind visiting one again, but that was crazy to me. The way [the wax figures] look, the height—it was crazy. It was on point. I had to get out of there.

SLAM: Are you gonna be playing any streetball this summer?

DL: Nah, that ain’t really my thing, man. I workout and every now and then I go play, but I’m not really into all that.