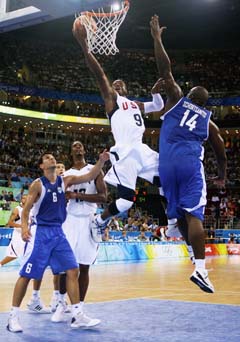 You all saw the Greece/USA game or at least read Lang’s great blow-by-blow blog, so I won’t bother with any recap. I’ll just tell you this: I have seen every team in this tournament play now, many of them in person, the rest on TV and it’s simple: Team USA can not lose unless they have some sort of mutiny or total breakdown.

After the game, I heard some people saying “Well, Greece just shot poorly from downtown.” Does anyone seriously think that the 4/18 was just bad luck? They were getting closed out on and not getting open looks. Even the best sharpshooter has a hell of a time with Dwyane Wade flying at him, or Chris Paul on him like jam on toast. The US was aggressive, rotating quickly, not getting beat by the pick and roll, not giving anything up. And if they keep doing that, they will not lose. No matter how they shoot from three themselves.

Their 35 percent from three as an improvement, but here’s the thing it doesn’t matter when they’re shooting better than 60 percent from two and getting to the rim at will.

Yeah, there’s are issues with the team’s makeup and we all know them. And it’s clear that Jason Kidd can not guard a ham sandwich right now. He got three fouls in 1:25, which to some extent set that no-holds-barred aggressive tone, but mostly was just sad. And Chris Bosh is clearly the best big they’ve got right now and should be starting. But DWade is probably their best player at the moment and they’re doing just fine with him coming off the bench.

And pause to think how far they’ve come’ four years ago they had Larry Brown coaching Steph and LBJ, Dwade and Melo growing moss on the bench. Speaking of Melo, wasn’t he supposed to be on this team?

One last thought: when looking for commentary from here, search for names you know and trust. There is a huge pool of reporters covering here who really don’t know what they’re doing. And basketball is easy compared to Beijing. If I read one more ill-informed story about this place I am going to find the offending writer, tie him up and force-feed him dumplings.

Imagine 10,000 reporters who have never watched an NBA game coming to the Finals and writing deep think pieces about the state of basketball and you’ll get the idea.