Darius Miles Shouldn’t Ask the Blazers for a Reference Letter 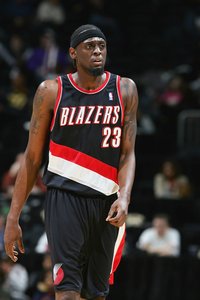 For the folks in Portland’s front office, the fact that Darius Miles was cut by the Boston Celtics last week isn’t enough. No, they reportedly want to make sure that no one in the League inks the 26-year old former Trail Blazer.

While the Celtics have been praising Darius Miles, two NBA general managers said the Blazers have been bad-mouthing the free agent forward to potential suitors.

“Too bad Portland is putting out bad information that he is not a good kid,”one NBA GM said. “Anything and everything they can say bad they are. It’s too bad. He’s a nice kid with a bad injury who has fought back. Right now, he’s still an NBA player and he’s going to get better. He’s going to improve. It will be a smart pick-up for someone.”

Of course, the issue here is money: If D-Miles plays in ten games over the next two years, the Blazers will responsible for $18 million of his salary.

Any way you slice it, $18 mil is a lot of scratch, but to actively try and keep someone out of the League in order to save money is beyond low. Shame on you, Portland.