Darko Is Going to Graceland 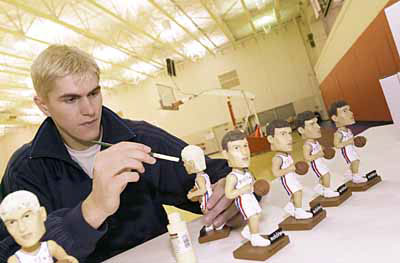 Pretty boring evening for me last night. I came home tired as hell and went straight to bed. Unfortunately, I was woken up in the middle of the night by the fan crapping out. The damn thing just died, and the temperature in my bedroom was something like 800 degrees.

Were it not for laziness, I would have made the trek to the basement of the house where it’s nice and cool. Instead, I suffered through the heat. Not fun.

Onto to the news & notes:

-Russ Bengtson has got you covered on the latest free agent signings.

(Have fun in Memphis, Darko. Try not to kill yourself.)

-Antoine Walker finally talked about the robbery at his home:

“When your life’s threatened, it’s obviously going to take some time to get over it,” Walker said in his first public comments since the robbery. “I’m not Superman.”

“The material things that were taken from me can obviously be replaced,” he said.

“I’m happy that I’m unharmed and safe, and so is my family,” added Walker.

Is this Amare’s new chick? Looks like STAT is following in Carmelo’s footsteps by going with a TV girl.

-Bill Simmons says that Channing Frye “sucks”, and the people in Portland rip The Sports Guy a new one. Well deserved.