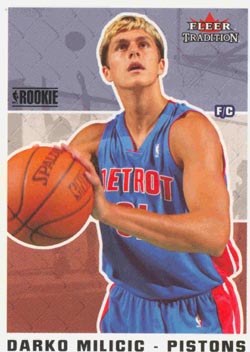 When the Grizzlies signed Darko Milicic, I bet they thought they were getting a shy, young power forward with all of the potential in the world. He could be a success in this League, all he needed was a nurturing coach (the anti-Larry Brown, if you will), some solid teammates around him, and a city that didn’t expect too much of its basketball team.

Instead, what Memphis got was a homicidal maniac with rapist tendencies. As you might expect, they aren’t too pleased with this.

“We’re very displeased with Darko’s actions and comments,” general manager Chris Wallace said. “It’s an emotional situation playing in national competition, particularly with Serbia, because they take pride in having good teams. But Darko has to be in control of his emotions.”

“There’s no excuse for his comments,” Wallace said, adding that Milicic is due back in Memphis within a couple of weeks. “We want to meet with Darko face to face and resolve this matter in an appropriate fashion.”

I mean, sure, meeting with Darko is probably a good idea, but just make sure you don’t bring any female members of your family to the sit-down, Chris. Because Darko might, uh, …, yeah, just leave them at home.