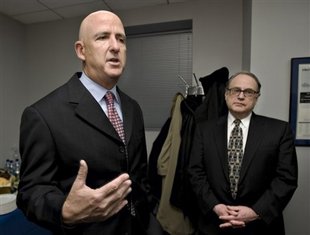 During All-Star weekend, David Stern and Billy Hunter told reporters that, in light of the currently toxic economic climate, preliminary talks had begun between the League and the Players’ Union about re-negotiating the collective bargaining agreement — more than two years before its expiry.

David Falk doesn’t foresee the negotiations going over well. The NY Times caught up with the legendary player agent, and according to Falk, we should all prepare ourselves for the oncoming war:

The N.B.A.’s system is broken, Falk says, and fixing it will require radical measures that almost guarantee a standoff in 2011, when the collective bargaining agreement expires. “I think it’s going to be very, very extreme,” Falk said, “because I think that the times are extreme.”

How extreme? Falk said he believed Stern, the commissioner, would push for a hard salary cap, shorter contracts, a higher age limit on incoming players, elimination of the midlevel cap exception and an overall reduction in the players’ percentage of revenue. And, Falk said, Stern will probably get what he wants.

Of course, whether or not this is little more than a blatant attempt by Falk to generate interest in his new book, The Bald Truth, is anyone’s guess. But it would be wise to at least listen to the man’s warnings, as he has been around the NBA block a few times.