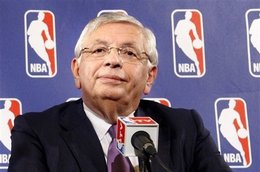 He had a vastly different reaction when told of players union lawyer Jeffrey Kessler’s comment about the relationship between players and team owners.

After the union rejected the latest proposal from the League — while agreeing to give up more of their share of the BRI, mind you — Kessler said that owners are treating their players as though they were “plantation owners”, which drew the ire of Stern.

Jeffrey Kessler, a prominent attorney for the players, accused the owners of treating his clients like “plantation workers,” a comment that drew a furious response from Stern. Kessler said the owners’ current offer to give the players half of basketball-related income was not a “fair deal” and that the soft salary cap functioned like a hard cap. “To present that in the context of ‘take it or leave it,’ in our view, that is not good faith,” Kessler, who also represented the NFL players in their labor dispute with the NFL, said in a telephone interview Monday night. “Instead of treating the players like partners, they’re treating them like plantation workers.”

In a phone call Tuesday, Stern blamed Kessler for the stalled talks and said he deserved to be “called to task” for the remark. “Kessler’s agenda is always to inflame and not to make a deal,” Stern said, “even if it means injecting race and thereby insulting his own clients. . . . He has been the single most divisive force in our negotiations and it doesn’t surprise me he would rant and not talk about specifics. Kessler’s conduct is routinely despicable.” The vitriol surely won’t help close the gap. “It certainly is dire,” Stern said about the stalemate.

If you can peel yourself away from the inflammatory comments for a moment, it’s important to keep in mind that, though the finish line to this lockout isn’t quite there, both sides have inched ever closer to a deal (thanks to yet another round of financial concessions by the players.)

If cooler heads can prevail (a very big if), this whole nightmare might soon come to an end.