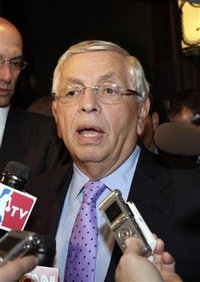 If you own some type of mass communication device — be it a television, computer, phone, etc. — there’s a very good chance you saw David Stern’s mug on there over the past few days. The NBA Commissioner has been on a massive media blitz, spreading the gospel of NBA team owners.

And even though his rhetoric has mostly reeked of thinly-veiled intimidation, misinformation, and strategically placed threats against players and their union, he continues to hold out some hope for the 2011-’12 NBA season.

During his latest appearance in front of cameras, yesterday on CNN, David Stern expressed a desire for a quick resolution to the lockout, and for games to start being played within a month.

National Basketball Association (NBA) Commissioner David Stern has set his sights on the regular season starting within 30 days as team owners and players prepare to resolve their labor dispute through mediation … “We would push as hard as possible to be up and running in 30 days,” Stern told CNN on Monday about his hopes for this week’s negotiations. Asked what would happen if no deal was reached, he replied: “We keep negotiating and we keep losing games in the calendar.” Stern had already identified Tuesday as a potential make-or-break day.

“If there’s a breakthrough, it’s going to come on Tuesday,” Stern said in an interview with NBA TV. “And if not, I think that the season is really going to potentially escape from us, because we aren’t making any progress.”

After meeting with each side separately yesterday, federal mediator George Cohen is set to get reps for the owners and the players’ union in the same room today to see if, for the sake of the game, a reasonable truce can be worked out.

Union president Billy Hunter has repeatedly said that, if both sides are truly intent on making one, a deal can be reached within hours. We’ll soon find out just how badly (and quickly) the League and its players want to get back on the court.