David Stern Is Unafraid of the Euros Stealing His Best Players 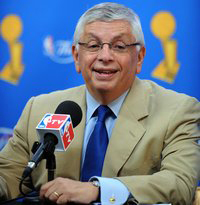 For a little while this past summer, it looked as though the floodgates might open up, and the possibility of NBA stars heading off to the Euro-lined courts of, well, Europe seemed like an ever-growing concern for the League.

The NBA lost a few talented players to European squads, but David Stern doesn’t foresee too many of his top dogs saying goodbye to the Association. The issue, according to the commish, boils down to simple economics.

“I guess if they want to induce NBA players at salaries that exceed the budget of the team to play in games that 1,000 to 5,000 people will go to, they’re free to do that and there will be one or two players that will benefit greatly from it,” said Stern.

But Stern said average attendance in Europe was only 6,000, so “the system will not support it. It’s important that we study the global world of basketball,” he added. “The economic model does not exist that would support such contract, and we don’t mind the competition. It’s probably good for our players.”

In other words: Bring it on, Europe. Lure the top guys at your own peril…Or something.