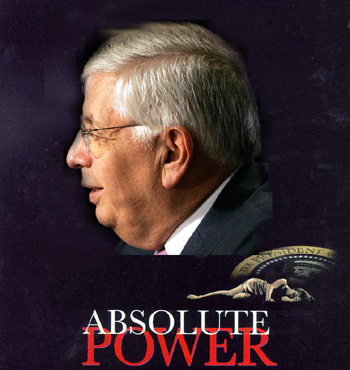 It’s the oldest story in the world. Power corrupts. David Stern, the Sternbot, is considered by many to be the greatest commissioner in sports. He took a league that was known for fighting and drugs, marketed flashy star players and personalities in the Magic–Bird era, promoted the Michael Jordan machine to take the league global, and made the NBA into a multinational conglomeration, whatever that word means.

I’ve always been a big Stern fan. Beyond the jokes about how he can have anyone killed at anytime on this planet, he always seemed to do what was best for the league, and he has a certain sarcastic sense of humor about himself that is very enjoyable. Sure, promoting individual players more than the teams they play for has created a culture of superstar entitlement that is a huge turnoff to many non-NBA fans, but under his watch the game of basketball has become approximately 10,000,000 times bigger than it was when he started.

That being said… at some point in the past he went too far. I like to trace it back to when the NBA left NBC and got in bed with ABC/ESPN/DISNEY. Maybe it goes farther back then that, when the reputation calls for superstars were getting out of hand. I don’t knowif there’s one event we can trace it to, but there was some point in time when Stern decided that it’s his league and he will be the one calling the shots. He admitted that he was the one that made the Ron Artest suspension decision by himself. This kind of behavior happens to most if not all powerful leaders. The megalomania bug infects them, and they go crazy with their own power. By the way, I really need to go see The Last King of Scotland.

So, you know all about the dress code protests, the controversial banning of straight out of high school players, and people questioning if there is a referee conspiracy. I thought then that maybe Stern is asserting a little too much absolute power, but it’s his league and he has a long track record of making it profitable, so he gets to make the call.

Howeva… He is not backing down from this new ball deal. He’s saying I AM THE BOSS, DO WHAT I SAY. Is he even listening to the complaints? I know the players are overdoing it with the whining, and people can be resistant to change when they are familar with something, but it really feels like Stern is putting his foot down and he doesn’t care what anyone thinks. That’s what military dictators do. David Stern is supposed to be a representative of the best interests of the owners and do what’s best for the game. Him saying that we’re going to the new ball and that’s final, with all kinds of opposition from the people that will be playing with that ball, just does not sit right with me. He’s the boss.

In other corporate NBA news, comes this partnership with Lenovo PCs. I don’t know what to think of Lenovo. Lenny Wilkens was involved with the announcement somehow, prompting Lang to skip the press conference. I guess this could just be a corporate league buddying up with another corporate sponsor, but it also says that coaches will have access to the computers right on the sideline and will know statistically which 5 man combinations benefit them. I enjoy the statistical side of sports, and I’ve read baseball prospectus books and all of that, but at some point I get tired of the robotization of athletes. One small item of good news buried in the story is that refs will be reviewing their first half performance at half time using these computers. Admitting there are flaws? Interesting. We’ll see how that works out. QUESTEC for the NBA!