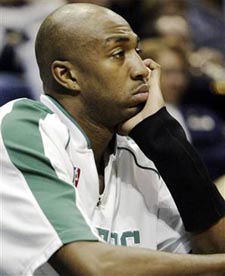 So much for the old “everything’s quiet this summer” routine. Reporters are talking to players and writing about them. Bloggers are previewing the season, Chris Sheridan is writing doomsday columns about the Knicks, with this photo included.

Vin Baker signed with the T-Wolves. Head coach Don Dwayne Casey (Boi-oi-oi-oi-oi-ng!!!) is quoted as saying “I know his issues. I know his disease. But the core of Vin Baker is a good person.” I’m sure he is, but playing for the T-Wolves is the kind of thing that could test a man ‘s ability to stay on the straight and narrow. Right Eddie? Oh wait, Vin is going to be his mentor. I take alcoholism seriously, so I don’t want to make jokes here. I’ll take the high road and say that this signing is completely meaningless.

Blogger NBA previews are taking off already. We’ll have our own slamonline season preview up soon enough, but for now the internet is sick with previewitis. Here’s one site that’s been rounding up the previews from some of the best NBA bloggers. Hey, is that Mutoni doing the Knicks?

Since our Michael Redd top 50 is active right now, here’s a look at which Bucks are clutch, and which are not.

A media day Q & A with KB from the Lakers. Kwame Brown, that is. Always fun.

so… many… team… previews…

I should link to this just because, well, Lebron says the Cavs can win it all. And Nazr Mohammed says he’s not Big Ben. Really? Rasheed is happy that Ben got his cheese.

Lots of Celtics stuff going on. Or at least a lot of people cover the Celtics.

If you read the last note here, Kobe Bryant admits that he’s a steroid user. Kidding! Or is he?