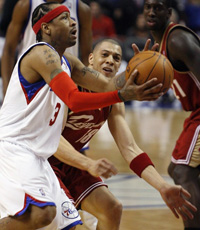 Although the Eastern Conference currently features three loaded powerhouses in Boston, Cleveland and Orlando, its overall talent and quality of teams falls short to the West. It’s been the case the entire decade. But there was a time not too long ago when the gap between the conferences was far greater, where the Western’s dominance wasn’t even questioned due to a lack of elite teams as well as a shortage of great players in the East.

The 2001 NBA All-Star Game was clearly evident of this fact, featuring a Western Conference roster that dwarfed its counterparts in skill and size. Just look at the starters:

On the other side, the West featured Jason Kidd, Kobe Bryant, Chris Webber, Tim Duncan and Kevin Garnett (for the injured Shaquille O’Neal). Beastly. And here’s some bench names for ya – Karl Malone, Gary Payton and David Robinson.

There’s no argument — one roster was ripe with talent while the other was simply full of Hall-of-Famers. Nobody expected the East to pull this one out.

But once Garnett and Davis lined up for the tip-off, the game began to follow the usual all-star game track. The first three quarters are a highlight reel rather than a competitive game – nobody really cares who’s winning or losing early – that is, until the two clubs suddenly begin to play for the victory once crunch time arrives sometime in the fourth. It’s amazing how the game transforms so quickly from an exhibition of dazzling moments into a battle of pride for the respective conferences. 2001 takes the crown since the highlight portion was quite spectacular only to be followed by one of the greatest down-to-the-wire comebacks in All-Star Game history.

The West jumped out to an early 15-2 lead which they didn’t relinquish until very late, carrying a 19-point lead into the fourth quarter. So while the score might not have been so exciting through the opening 36 minutes, the thrilling plays certainly came in heavy doses.

Amidst a multitude of first quarter dunks, including high-flying alley oops to Garnett and Ray Allen, Iverson delivered a beautiful underarm self pass that he finished in reverse lay-up fashion. The crowd and the camera wasn’t exactly sure what happened. I was – it’s called amazing body control.

In the second quarter, Carter displayed a nasty 360 that would’ve been considered ordinary in the dunk contest. He drew a hilarious reaction from Shaq, of course. Later in the quarter, Mason dashed a cross-court bouncer to Vince who finished with a hard windmill. These were the kind of dunks that made you realize just how athletic Vince was, how his 2000 dunk contest performance should not be taken for granted.

In the third quarter, Kobe and Garnett were involved on the two best alley-oops of the game. First, Kobe had the ball on a break and laid up a perfect pass off the backboard, where a trailing KG emerged out of a pack, went sky-high and threw it down with a huge right hand dunk.

Only a few moments later, the roles reversed as Garnett floated the rock away from the rim only to have Kobe reach back behind his head and slam it home which drew plenty of buzz around the MCI center.

But as the final quarter was looming with the East down by 19, nobody anticipated what would happen next.

The fourth quarter began lazily, with the West still holding a comfortable 21 point lead with nine minutes remaining. The Eastern conference couldn’t find the net whatsoever, and as Kobe and Shaq delivered a bilingual comical analysis on the sideline, it seemed like this all star game was headed for a laugher.

That is, until the East put on their running shoes. In the next stretch, Carter, Ray-Ray, and Stackhouse were gunning after every defensive board – all contributing to a quick three minute, 11-1 run that left the East trailing, 96-85.

Iverson, recognizing that the Western Conference was well within reach, took over at the helm. On each possession, he immediately got the ball in his hand and ran down the court with a head of steam. Easy jump stop for a layup. Finds Stackhouse off the inbound for an open three. Finds Vince on the next possession for another trifecta.

And with that, the defensive intensity on the Eastern side clearly maximized – as Dikembe Mutombo manned the middle with tenacity, the Western stars couldn’t help but settle for long jumpers.

Off a well-defended turn around miss by Kobe on the following possession, the Answer grabbed the board and demonstrated the speed. He flew down the court in a split second, outrunning his whole team and every defender as well. Kidd could do nothing but foul the little guy at the top of the key, yet Iverson was able to take two huge steps to get the easy continuation at the rim. And 1, and a score of 100-96. The West’s insurmountable lead was now in the past.

After another two great defensive stands by Mutombo, Iverson hit two free throws following a hard drive…and then out-sprints everyone again to the hole only to have McGrady pick up the loose change for an easy bucket. And just like that, the game was tied at the century mark.

Iverson wasn’t even close to done as the final three minutes made for scintillating television. Following a KG jumper, AI nailed an open three that gave the East their first lead 45 minutes into the contest, 103-102, only to head back to the strike on another long, touch drive to the hole. After converting both free-throw attempts, the East had the lead once again, 105-104. And although Iverson did so much more than just score in this game – it’s hard to ignore that 15 of his 25 points came in the final quarter.

Then all of a sudden – the battle of Bryant vs. Marbury emerged. With a little over a minute remaining, Kobe dropped two long jumpers off the dribble that gave the West the 108-105 lead. And although many thought the ball might have gone back to Iverson, the other little guy instead spotted up and drained the game-tying three-ball in Webber’s eye. Starbury had been quiet since hitting a three to open the quarter, but he shined in the final minute.

The West’s final points came with 37 seconds left as Kobe (you guessed it) converted an impossible jumper that had his team up 110-108, but Marbury takes the lead right back with another beautiful rainbow from beyond the arc. 111-110, East led with 28 seconds remaining. That’s six points each for Kobe and Marbury in the last two minutes. But on the West’s final possession, Starbury would now contribute on the defensive end, forcing Kobe to give up the last shot to Duncan. After the buzzer sounded and TD’s shot fell short – AI, Marbury and co. shot down the court, pointing to the crowd and their respective home white jerseys.

What a show. What a comeback. What a performance by Iverson and Marbury, the two smallest guys on the court, down the stretch. AI would be named All-Star Game MVP for his heroics and leadership – leading to a memorable moment where Allen asked for his coach, Larry Brown, at the podium.

So, with apologies to the 2003 All-Star Game (Michael Jordan’s final appearance), this game had it all. Sick passes, unconventional moves, high-flying dunks as well as an incredibly competitive fourth quarter. And here’s the best part – even in a game of all-stars, we witnessed a captivating underdog story.