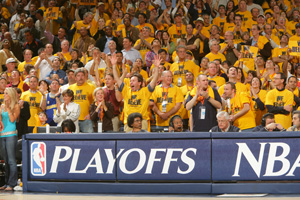 Each decade of NBA history has a trademark upset, and each trademark upset comes with a trademark image. In the ‘80s, it was Ralph Sampson’s rubber band man jumper to beat the Lakers. In the ‘90s, it was Dikembe Mutombo on the floor, radiating happiness after his Nuggets beat the Sonics. But the greatest upset of the 2000s didn’t come with an image of a shot or a player. It came with a memorable group of fans. Fans who Believed.

“It was the loudest building I’ve ever been in,” says Keith Smart, an assistant for the Warriors and former NCAA champion. “If you were at that first home game, you were deaf. Your hearing was just starting to come back, and it was time for the next game. Then you lost it again.”

Like all great upsets, it seemed impossible at first glance. The 2007 Mavericks had the sixth-best record in NBA history, and were the defending Western Conference champions.

The Warriors, on the other hand, finished one game over .500 to squeak into the final Playoff spot. It was their first Playoff appearance since 1994, and they hadn’t won a Playoff series since 1991. Two members of their starting lineup, Stephen Jackson and Al Harrington, had come over in a midseason trade from the Indiana Pacers, who were happy just to be rid of them.

But like all great upsets, there was more to the story. In truth, it was a disaster waiting to happen for the Mavericks. During the ‘05-06 season, the Warriors won only 34 games, but for some reason were 3-1 against the Mavs. Following that season the Warriors hired Don Nelson as their head coach. Nelson had previously been pushed aside in Dallas, where he helped build the Mavs into a consistent winner.

In ‘06-07 the Warriors’ last two regular-season games against Dallas – both late in the season — were blowout wins.

“Going into the Playoffs, we were very confident,” says Matt Barnes, a forward on the Warriors that year. “Nellie had a great game plan. We knew everything the

y wanted to do, and every second option they had.”

And most importantly, the players, the fans, and the entire Bay Area had all come together. For a few weeks, everybody Believed. It all started on a plane trip after a tough road loss in Washington, where the Warriors’ record fell to 26-35.

“We thought we got robbed in that game,” says Smart. “On the flight to the next city, Baron (Davis), Jack (Stephen Jackson), and Matt Barnes were in the back of the plane, and they were mapping it out. They were saying ‘we have to win this number of games to get to the Playoffs.’ From there, things took off. The team gelled.”

The Warriors only lost five games the rest of the regular season, four of them to other Playoff teams.

As the team took flight, a season-ticket holder named Paul Wong coined the phrase “We Believe,” and spent $5,500 of his own money printing placards. Soon, “We Believe” started appearing on t-shirts and other licensed product. A fan base that had waited 13 years for a playoff appearance went insane for a team that was built largely of castoffs from other clubs, including the three players who sat in the back of that plane.

The players sensed their chance at history early on. “We saw that if we got in we played Dallas, and we knew we had a pretty good shot,” says Smart.

After beating Dallas in six

intense games, the Believe Warriors fell apart like a bad marriage that was once a great romance. In the second round of the Playoffs the Warriors were quickly ground down by a physical Utah club.

Barnes, Mickael Pietrus, and Jason Richardson changed addresses shortly afterward. Boom Dizzle and Stephen Jackson made acrimonious departures. Wong butted heads with team president Robert Rowell and canceled his season tickets. And the Warriors haven’t been back to the Playoffs.

But if you go to a Warriors home game there are still plenty of fans in We Believe t-shirts. The current team isn’t good, and it’s easier to pull on that bright yellow shirt and remember the spring of ‘07. And what a memory it is. Your ears can start ringing just thinking about it.