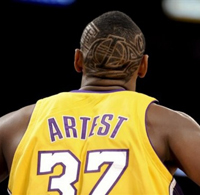 Consider the night of November 19, 2004 a night of bad choices. It’s a simple way to sum up one of the most alarming conflicts of the passing decade in professional sports. You may remember when and where you saw the “highlights.” You could have even been in attendance at the Palace that night. Wherever you were, we all shared the same feeling when the fans turned matador to a raging Artest.

After Wallace was fouled hard by Artest (but not that hard) and the scuffle ensued, the conflict appeared to be settling. The two teams came together at the sideline where coaches and security attempted to diffuse the matter by latching on to their players. Lounging on the scorer’s table in the Palace of Auburn Hills isn’t a wise decision, and obviously Detroit fans let him know.

“I lay on tables a lot. I lay on my bench in my neighborhood and nobody throws cups or rocks at me,” said Artest during an interview with QD3 Entertainment.

Unfortunately The Palace wasn’t his neighborhood. At that point it seemed like the tension in the arena was hanging by a thread. The crowd was hissing when spectator John Green suddenly tossed his “soda” onto Artest disrupting his lay-down. It acted less like a beverage and more like a grenade. If you blinked you missed it. Without hesitation he hurdled the barrier into the stands. It became a surreal moment as the holy division between players and fans collided. Fists came down on fans relentlessly, and the gestures were mutual.

Two days after the altercation NBA Commissioner David Stern held a press conference that would take the League into tighter confinement. “We must redefine the boundaries of acceptable conduct for fans attending our games and resolve to permanently exclude those that overstep those bounds.”

John Green, the spectator who allegedly sparked the fury is also seen punching Artest from behind during footage of the brawl. He is widely considered as the sole instigator of the problem and was charged with counts of assault and battery.

“The actions of the players involved wildly exceeded the professionalism and self-control that should fairly be expected from NBA players. We must affirm that the NBA will strive to exemplify the best that can be offered by professional sports and not allow our sport to be debased by what seems to be declining expectations from fans and athletes alike.”

The biggest suspensions in NBA history were issued as Artest sat out the remainder of the season (73 games and the Playoffs) without pay. Stephen Jackson got a 30-game suspension, Jermaine O’Neal received 25 games (later cut down to 15) and Ben Wallace missed out on six regular season games.

A lot of people felt that the fans should be held more accountable for their role in the fight. “The punches that Artest and O’Neal threw at fans on the court should be exempt from suspension because all bets should be off when a fan comes onto the court and goes after a player,” said Tim Legler, a retired NBA player and ESPN analyst. “When fans go after a player and threaten him physically, they deserve what they get.” In all fairness, both groups were to blame. It’s a chicken-egg debate. If so and so didn’t do this, then so and so wouldn’t have gotten a haymaker from JO. There are no ifs ands or buts. Everyone reacted poorly and as a result people suffered. Luckily in the wonderful world of sports, when incidents happen like this, people will continue to watch or perhaps even watch more. That’s how spectacles work. For the following two seasons the Pistons led the League in attendance.

Realistically, this wouldn’t be the fight of the decade if it weren’t for the fans (hold your applause). It wouldn’t have been a fight at all for that matter, and that’s a good thing. November 19, 2004 was a night to set an example of what not to do during a basketball game. There might always be that one drunk dude who gets too rowdy– because David Stern can only enforce so much. And since we now know there is no force field between bleachers and hardwood, maybe the next John Green will take a seat.

“There’s a line. People know that. They know what they should and shouldn’t do.” — Ron Artest