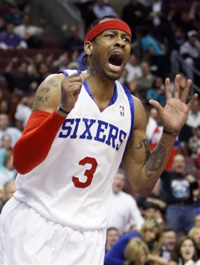 The game of basketball is shaped not only by the moves on the court but by the banter extending between the ballers. Trash talking is as much music to my ears as the sound of the net cutting after a jumper by Kobe Bryant or Ray Allen. And if you’re a journalist, or an NBA fan in general, there is nothing quite like a quote for the ages. This decade brought a few but only one that will follow a certain player like a shadow, or even a Kardashian to an athlete.

The NBA’s finest certainly have the gift for gab. Rasheed Wallace may be hated by refs but we have love for him for dropping lines like “the ball don’t lie,” and “both teams played hard,” in press conferences. He’s definitely a quote Hall of Famer.

Tracy McGrady will live in infamy for saying how great it was to “finally be in the position to advance to the second round,” in spite of the fact that his Orlando Magic had only taken a 3-1 series lead on the Detroit Pistons. Motown went on to wax that ass and T-Mac has only seen the second round of the playoffs while in a suit. The Basketball Gods don’t play.

I still get chills when I hear the Boston Celtics’ Kevin Garnett shout “anything is possible!” to the heavens after finally grabbing the championship that eluded him for so many years, but it isn’t the greatest quote of the decade. Not quite.

If we were to give an award to the greatest individual for their lifetime achievement in sound bites, it would unquestionably be Shaquille O’Neal. The Big Aristotle, make that The Big Cactus, make that the Big Rock n’ Roll Hall of Fame (because what else is there to do in Ohio?) has given us enough quotes to fill a Slam Magazine vault. He’s the interviewer’s equivalent of Fort Knox.

The quote that stands out most recently from Shaq Diesel, perhaps unfortunately, comes from his taunt of Kobe Bryant after the Boston Celtics won the 2008 NBA Title. We couldn’t give quote of the decade to Shaq for “Kobe, tell me how my ass taste,” unless we got an endorsement from Listerine, and that wasn’t coming. Not in this economy. Needless to say, it left a bad taste in everyone’s mouth after he made that rap at a nightclub. Thank God Kobe won a title before Shaq got another chance to drop a flow. Couldn’t you see him next to LeBron yelling, “I’m so glad we finally got LeBron a C-ring. That’s the Cleveland ring, son. This next song goes out to that jackass, Kobe. I call it “The Donkey Show. Bring The Shaq-anatrix his whip.”

The quote of the decade goes to a cat who will probably never be understood or appreciated for who he is as a player or a person. Quotes like this one are probably why. What are we talking about? We’re talking about practice.

Allen Iverson launched a verbal assault of redundancy for the record books in his first run as a Philadelphia 76er, in a press conference after being criticized for missing too many practices. Yep, the P word. Coaches everywhere cringed upon hearing it. How many players of lesser talent do you think took this idea to heart and dogged it for a few plays? More than a few, I can promise you. The only difference is that Iverson could get away with it at the time.

His response, whether he likes it or not, helped paint a picture of a high profile athlete that felt he was above the time and effort it took to put into the game before it started. The stigma that A.I. would only play the game by his rules still stands true, as he refused to come off the bench for both the Detroit Pistons and Memphis Grizzlies. Thank God that the Philadelphia 76ers have a soft spot for him, and for ticket sales.

When Iverson briefly retired, the discussion of his legacy on almost every radio or TV sports show I saw was interlaced with video of “the practice meltdown.” I still laugh when I see it. When Iverson is inducted to the NBA Hall of Fame, we will see this clip. In fact, I have no doubt that some analyst will try to get cute and say, “whether he needed practice or not, The Answer was without question a warrior.” Stuart Scott, I am looking in your direction. Boo ya, son.

Love him or hate him, Allen Iverson was, and maybe still is, a fearless competitor. He entered into a lane of giants with reckless abandon and helped change the way that the game was played. However, he also changed how the public viewed him in a little less than three minutes. You can say that A.I. isn’t an efficient scorer but damn if he isn’t efficient in leaving an impression. It’s only fitting that one of the greatest players and athletes of all-time would drop a quote for the ages. Best quote of the decade and perhaps the best quote ever from the NBA? There’s no doubt that the answer is Allen Iverson.