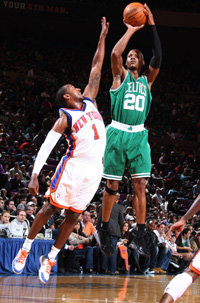 In assessing the decade’s top shooter I tracked down grainy, pre-HD video montages, scoured through lists of all stars, tried to make sense of stats I didn’t know exist, and… disregarded it all. The true mark of evaluating a marksman is recognizing one when you see one, and Ray Allen, the smoothest of operators, has earned the decade’s superlative while staking his claim as one of the top shooters of all time.

As the prototypical NBA player becomes too athletic for today’s game, the smaller Larry Bird, Reggie Miller and Steve Kerr appear in the rearview mirror. Allen has managed to channel his athleticism into a devastating weapon, keeping defenders honest and allowing himself the few inches of daylight he needs to deliver the basketball in a perfect arc toward the rim.

Allen is a study in consistency. Whether bursting off the dribble or brushing off a screen, Allen plants his left foot, squares his body toward the basket, bends his knees and elevates straight up – not veering this way nor that. He pumps the basketball from his torso with his right hand gripping the seams raising the ball to a crescendo above his head, perfectly between his eyes.  He needs little time, as his left hand guides the ball before the right wrist snaps forward, violently, striking a steady, if uncomfortable, pose, and ensuring optimal backspin all in the matter of a split second as the ball is sent off on its parabolic journey.

Allen, whose self-admitted obsessive compulsive disorder-like tendencies translated into countless hours practicing what has become the NBA’s most enviable stroke, put up sensational numbers throughout the ‘00s while punishing defenders from all over the court. He has proven himself in the clutch, most recently as the Celtics’ top threat in the waning moments of a close game. He’s reliable from the charity stripe 89 percent of the time and has hit nearly 40 percent of his three-pointers – a shot of which only Reggie Miller has attempted more.

Surely, other great shooters were considered. Peja Stojakovic, perhaps the best pure shooter of the decade, never fully regained his form following a back injury in 2006-07. He has failed to shoot 40 percent from the field since and his average has been steadily dropping since 2003-04.  Michael Redd, though deadly from the perimeter, has played in 112 fewer games than Allen this decade and didn’t fully burst onto the scene until ’03-04, giving Allen f

Having spent most of his career as the his team’s top scoring option, Allen’s outside shooting has become more crucial than ever as Boston’s second, if not third, option. While covering a Celtics-Supersonics game in ’05-06, I noted that Allen, then with Seattle, is the most surprisingly exciting player to watch live. He manages to pull off the most unlikely shots, contorting his elbows, barely glancing at the rim and somehow managing to guide the ball through the net, ever so much as grazing the rim on the rare occasion.

Allen has made an art form out of shooting for 14 years now.  But you have to see him live to fully appreciate why he has truly earned the title of the Decade’s Best Shooter.