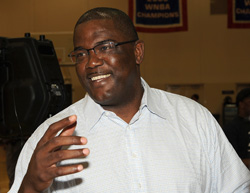 General Manager of the Decade. Hmm.

This seems to be a no brainer.

But let’s not just hand it to RC Buford or name the award after him just yet.

The San Antonio Spurs are the League’s model franchise because they’re the antithesis of the modern franchise. There’s no bickering, no scandal, no apathy, no nothing. There should be little doubt as to who the team of the decade is, the Spurs’ care free consistency was more appealing than the debilitating drama-and questionable resurgence-in Los Angeles.  But in acknowledging that, we are recognizing the collective efforts of Holt, Buford, Poppovich, Duncan, Ginobili and Parker, Ballers By Law. Which of course weakens each of their cases in claiming any individual awards, and that includes Buford.

As for the other 29 guys, managing a franchise in this crazy business is a job few have long enough to achieve any measure of success.  Only a handful of candidates can arise for an award that requires such tenure and Joe Dumars would seem to be the next logical choice.

The Detroit Pistons were his vision and his alone. As was Darko Milicic. Is there a category for ‘Worst Decision of the Decade’? Can a GM conceivably win both? It was the right call to break that team up, but to do so in hopes of signing a player you should have drafted in the first place? Only to spend it on Ben Gordon and Charlie Villanueva instead?

That reminds me of the time I divorced my wife during a rough patch in our marriage because I thought I had another chance with her younger sister. I never did take that chance though. I knocked up two girls from the local community college instead.

This of course, never happened. Yet had it, I wouldn’t be surprised if my ‘Husband and Father of the Decade’ Trophies were lost in the mail.

Am I exaggerating? Probably. But you fucked up, Joe. Big time.

Problem is, the rest of the candidates pale by comparison. Kupchak and Ainge? Shrewd drafting, but beneficiaries of the two ‘Biggest Insider Trades of the Decade’. Donnie Nelson? Not enough rings. Colangelo? Smith? Pritchard? Presti? Not enough time. It seems whoever wins this award is also receiving more credit than they deserve.

Can’t we just wait and give it to whoever signs LeBron?

Okay, now I’m stalling. There are only two worthy recipients and I still don’t know who to pick. I didn’t-and still don’t- want to be lazy or presumptuous in just giving the award to Buford, especially since he’s essentially a figurehead or the representative of a triumvirate at best. Can you really be GM of the Decade by continually reaping the benefits of two good decisions? Yes, Parker and Gino

bili were absolute steals the two Biggest Draft Steals of the Decade, but that’s it? That’s all it takes? Yes, there’s something to be said for moves that weren’t made and for the seamless integration of complements, but again, all benefits of two good phenomenal decisions. Group decisions.

I’m sorry San Antonio, but you leave me no choice. You can’t give an individual award to a group. Until one of you is selfish enough to demand the credit, none of you can have it.

Winner by default, Joe Dumars is GM of the Decade.

Now if you’ll excuse me, I’m going to check the mail.