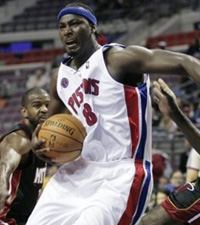 When the writing topics were sent out for the decade’s best and worst, ‘Biggest Bust’ wasn’t even one of the initial topics. It was a subtopic at the bottom of a list of about fifty or so main ones. But the minute I saw it, I knew I had to claim it. While the other topics were a little more thought provoking, this one required little to no thought whatsoever. Sure there have been a lot of busts to come into the NBA over the past ten years—you know, like every player that came out of Duke—but there is no player that epitomizes the term ‘Biggest Bust’ of the decade better than Kwame Brown.

Coming out of Glynn Academy in Brunswick, GA, Brown was widely considered to be the best player in the HS class of 2001 which included fellow big men Eddy Curry and Tyson Chandler. We all saw the videos of him dominating his competition and he looked like a man among boys. The prevailing thought was that once he made it to the NBA, given some time and some grooming, he was going to be a beast. He had good size at 6-11 and his potential and upside seemed limitless. He was Mr. Basketball in the state of Georgia and finished his career at Glynn Academy as the school’s all-time leading rebounder and shot blocker. Although he signed to play college ball at Florida, his stock was high enough to make the prep-to-pro jump. Kwame Brown appeared to be a “can’t miss” pro prospect.

Michael Jordan became part owner and President of Basketball Operations for the Washington Wizards in January of 2000 and was in charge of all personnel decisions. The following year the Wizards won the NBA Draft Lottery and the right to pick first in the draft. It would be Michael Jordan’s first, first round pick as an NBA team executive. And since he was the greatest player to ever play, we all figured he had to have a good eye for talent and there was no way he could screw this up. Right?

The NBA Draft Class of 2001 wasn’t exceptionally strong to begin with. Sure it had guys like Pau Gasol (3rd), Joe Johnson (10th), Tony Parker (28th), and Gilbert Arenas (31st) who would later become all-stars, but it also had guys like Rodney White (9th), Kedrick Brown (11th), Kirk Haston (16th) and Michael Bradley (17th) who all washed out just as quickly as they came in. Still, something unprecedented happened in that draft that year as Michael Jordan made Kwame Brown the first HS player ever to be chosen number one overall.

Nine years in the League, four teams, and career averages of 6.9 points and 5.5 rebounds per game. There hasn’t been a bigger bust picked No. 1 since Michael Olowokandi came out of Pacific in ’98.

So what did Michael Jordan really see in Kwame Brown that made him take a gamble on him with the first pick? Was it his size? Was it his potential? Or was it just a guy looking out for his illegitimate son? I guess we’ll never know.