Delonte West Has A Crazy Ex-Girlfriend 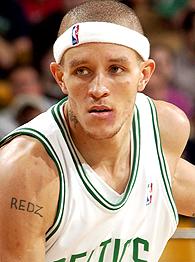 Man, it must really suck to be a Celtics fan today. Well, the whole year has sucked to be honest, but today has been especially bad.

Caryn Taylor, who was Delonte West’s live-in girlfriend, allegedly went buck wild when Delonte tried to end the relationship last year. According to the police report, Taylor choked and bit West, and tried to slash her own wrists with shards of glass. Yeeesh!

This only came out because Caryn Taylor skipped her court date yesterday; she was going to be arraigned on domestic assault and battery charges for the attack which took place in late December at the couple’s home. A warrant for her arrest has been issued, authorities said.

Taylor told police she wasn’t trying to kill herself but was cutting herself to show West she wasn’t “(expletive) around” about their relationship. She said she was angry because West’s friends and family had been staying with them and were “picking on her.”

Of course, no article on Delonte West would be complete without a visit to his classic interview on Page 2, in which he described what his idea of a romantic evening would be. Some highlights:

“So, I pick her up in my white convertible. From there, I’d have the music pumping on the radio. The Jim Jones pumping, you know, ‘Summer in Miami’ song pumping. Got to keep a little gangsta, you can’t be too soft. You can’t be in there playing some guy that’s crying, talking about don’t leave me and love me baby, wah wah and all that. So Jim Jones pumping and then from there, wind blowing through the hair, boom, we get straight to the point — we eat afterwards because I don’t want to kiss no onions. I don’t want to kiss you tasting like onions and steak and mushrooms and everything.”

“Yeah, we’re going to my yacht. We’ll pull up at the docks and got a guy waiting for us, open our door up and we walk down a lit-up dock and onto the yacht, where we have dinner set up on the boat and we just cruise out on the water. Sit down and have some dinner, some shrimps and steaks, keep it nice and breezy. Pop some bottles, some Moet Rose. The red Moet, we ain’t popping no Kristal, it tastes like urination. We ain’t popping no Kris, that’s $500 a bottle. It ain’t that serious. It ain’t going to get you drunk. Make sure you put that in there. We ain’t doing a $500 bottle, we’re doing a $99 wine and dine.”

“OK, so from there, we’re doing a midnight skinny-dipping jump. Alright? From there, hopefully she’s got money because I hope Jaws gets her, boom, make sure she got me in the will, bank, I’m good. Oh well, shark got her! Jaws got her. Nah, we ain’t going there.”

“One more thing: When we’re on the yacht eating, we’re going to have some Popeyes chicken. That’s for dinner. It’s to let her know, put a mental image on her mind, first and foremost, if you ain’t from the hood, you don’t like Popeyes chicken. Everyone there loves Popeyes chicken and the biscuits — phew. But that’s just getting it on her mind, saying, you know, ‘Yeah, I can wine and dine you, but I’m a little rough around the edges and I’m keeping it real with you. I can be romantic, but this is real, we’re going to eat some chicken tonight. Chicken and biscuits.”

Call it a hunch, but I have a feeling Delonte’s Valentine’s Day was a tad different this year.