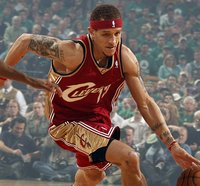 For the Cleveland Cavaliers, training camp — like the rest of the season — was supposed to be largely about one thing: Shaq and LeBron’s uneasy co-existence. Instead, a funny (and perhaps worrisome) thing has happened along the way. The focus in Cleveland, for the time being, is on another player.

Since his arrest a couple of weeks ago, Delonte West hasn’t been on a basketball court. Which means he didn’t take part in the Cavs’ first day of practice, something the team did its best to diffuse. West did not show up for morning or night-time practices yesterday, an absence that was deemed as “unexcused.”

The Plain Dealer has more:

“Delonte is in Cleveland,” Cavs General Manager Danny Ferry said in a statement. “He is addressing a personal matter and did not attend practice.”

“On a personal note, you always hope he’s doing well,” Cavs coach Mike Brown said. “But I have to continue looking forward and coaching this team. Whether it is Delonte or somebody else, if they miss practice and it is unexcused it will be handled internally.”

Not to play doctor here, but with Delonte’s well-documented mental health issues, one can’t help but get the feeling that this situation could turn dicey if the Cavs don’t handle it delicately. Mike Brown may not be pleased with West’s absence from training camp, but he and the rest of the organization must tread carefully here.

It’s going to be an interesting, and wholly dramatic year in Cleveland. What no one had previously considered, is that the source of the drama may not always be the team’s two megastars.