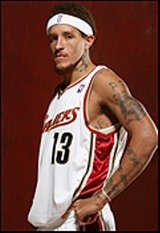 For Delonte West, it has been an offseason from hell. And things aren’t getting any better for the troubled shooting guard; the situation is worsening as the start of the regular season looms.

According to 19 Action News, a Cleveland television station, Delonte got into it with his wife over the weekend, resulting in a domestic violence report getting filed:

The two reportedly fought at their apartment when Delonte tried to take her wedding ring off. Mrs. West left their home and headed to Cleveland Hopkin’s International Airport, where she filed a domestic violence report. Cleveland Police tell 19 Action News there were no signs of abuse or injury. Mrs. West then got on her flight and flew out of Cleveland.

Tad Carper, Vice President of Communciatons with the Cleveland Cavaliers tells 19 Action News “the team was contacted and is aware of the situation but declined any further comment.”

Undoubtedly, there will be more to this story in the coming days.

It’s unfortunate, but at some point (sooner rather than later), Danny Ferry and company are going to have to make some very tough business decisions — assuming they haven’t already.