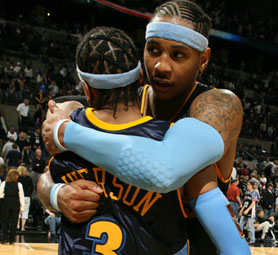 I had scripted this long introductory diatribe about my crazy weekend, which included travel to Houston, as well as finally watching Game 1 of the Denver v. San Antonio series just yesterday afternoon.  I axed the personal crap.

“Everyone’s always writing us off.  The so-called “experts” all seem to be saying, ‘the Nuggets are the hottest team in the NBA.’  But those same people are also picking the Spurs.”
This quote was uttered by Marcus Camby just minutes before the tip of Sunday’s Game 1.  Oddly enough, the 10th-year center might as well have been talking about yours truly, as my prediction of the series included not only extreme gushing about the Nuggets’ current play, but also gave the ultimate nod to the Spurs.  I have the utmost respect for the way the Nuggets have been playing over the season’s last two months especially on the defensive end, but I just felt that the Spurs would dictate the way the games would played.  Unfortunately for the Spurs, the current installment of the Nuggets is not the inexperienced, naïve, somewhat banged-up team they faced two years ago in the first round.

“We just have to beat them to the punch and just out work them.  Whoever wants it more and plays harder, will win.”
The Nuggets’ mercurial leader, Allen Iverson was not here when the Nuggets took game 1 of that series in ’05, but beating them to punch and constantly outworking the Spurs are two things that did happen simultaneously on Sunday night.  Two years ago, Iverson’s predecessor and trade partner, Andre Miller put the team on his back for the victory in Game One.  Sunday night, however, the Denver Nuggets beat the Spurs 95-89, as a team.  Yes, their two superstars both hit the 30-point plateau, but the inside battle, defensive intensity, and intangibles were all won by the Nuggets, areas that have hindered this team for years.

“Let’s have some patience.  Don’t try to hit the homerun.”
This line was spoken by Coach George Karl during a timeout midway through the second quarter.  No one player on the Nuggets’ roster abided by this adage like Carmelo Anthony, who has struggled in all three of his previous trips to the postseason, especially in the series’ opening game.  Melo first lucked out by drawing Michael Finley as apposed to his defensive nemesis, Bruce Bowen, who was put on AI.  The Answer got off to a rough start missing his first six shots, while Anthony started quickly, giving the Nuggets an early lead on the heels of his 10-point first quarter.  Melo was also able to sustain his play, hoisting only 18 total shots from the field on his way to 30 points and 8 rebounds for the night.  To his credit, AI rebounded by hitting 11 of his final 16 shots and played a great all-around game.

“In the end, they just executed their stuff, defensively and offensively better than we executed our stuff.”
Spurs Coach Gregg Popovich was on the local Denver airwaves yesterday spouting that analysis.  Rarely do teams “out-execute” the Spurs on either end of the court, let alone both.  Pop also added that he was most impressed with the Nuggets’ defensive attack which frustrated both Tony Parker and Manu Ginobili by crowding the paint, forcing the “drive-first” guards into outside jumpers or forced, contested runners in traffic.  The Nuggets’ focus on interior defense also made things a crowded mess for Tim Duncan, allowing the Nuggets to “contain” the Spurs’ big man with out having to resort to double-teams.   The scheme also kept Nene and Camby out of foul trouble, which was/is a big concern as the series rolls on.

You’ve seen the stats by now—Melo/AI combine for 61, while the Nuggets “playoff-shortened” bench contributed just six total points.  The Spurs, on the other hand, rolled 11 deep getting 38 from the reserves, but their big three combined to shoot just 36% from the field. Game 2 doesn’t take place for another couple of weeks or so, but rest assured Pop’s squad will be aggressively on the offensive. Until then.