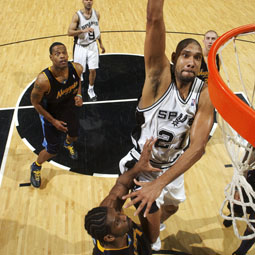 Both of the first two games of the Denver v. San Antonio series were not the easiest ones for me to watch. With game 1, I was rushing home from a last-minute trip to Houston and missed the live telecast, instead settling for a local replay a day later. Game 2 was quite different, as an April snowstorm blew through the area, rendering my mountain abode (8500 feet above sea level) useless. No power, no water. We were able to dig out from underneath the 26 inches of the white stuff (five hours later), and make out way to my parents’ home just to the north. Their house was also under a foot and a half of snow, but equipped with the electricity necessary for television viewing. Keep in mind that Denver actually got no snow accumulations, but just 15 miles and 25 minutes to the west, Jack Frost was still on the job.

Instead of the usual report that I have produced over the years in this space, I will give more of a quarter by quarter blow by blow. Not unlike the infamous “Appleson,” there will be two voices emanating from this report. My dad, a Denver sports fan diehard and former collegiate baller from back in the day, added his unknowing opinion, that I feverishly scribbled as he prepared a brilliant Prime Rib dinner for us vagabonds.

The Spurs were able to bounce back and procure a 97-88 victory in Game 2 despite a furious late run by the Nuggets. The series heads back to the Mile High City for two more games; Game 3 tipping Saturday night.

(My father’s quotes will be separated in italics.)

Both teams are having success penetrating and making interior passes. The Nuggets are simply struggling to finish their easy opportunities. The Spurs, on the other hand, are cashing in.

The Nuggets’ dynamic duo of Carmelo Anthony and Allen Iverson are struggling to get going, as both are having trouble getting baskets to fall.

Nugget’s Head Coach George Karl had planned to tag-team defend Tim Duncan, as apposed to doubling on a regular basis. Nene would start on the three-time NBA Finals MVP, but the minute he got his first foul, Marcus Camby would switch over. Game 1 saw neither get into early foul trouble, but last night was different as both were saddled with early “ticky-tacky” calls defending Duncan. While neither Camby nor Nene was ever truly in foul trouble, the early calls were a sign of things to come.

My dad was surprisingly quiet early on (don’t worry he warms up,) making brief comments about Manu and his propensity for the dramatic.

“There he goes again, with that flopping!”

Both teams struggled a bit from the field, with the home team holding a slight advantage shooting 33% from the field as apposed to the Nuggets’ paltry 29%, many of which were around the cup. Spurs finished the quarter with a 24-18 lead.

The Spurs can make lay-ups, the Nuggets can’t.

The first three minutes of the second quarter continued the feeble shooting for the Nuggets.

Nene re-enters the game around the 8 minute mark and gave the Nuggets a much needed lift inside. His progress over the last half of the year has been largely overshadowed by the teams’ overall great play.

Eerily similar to Melo’s first couple of years in the league, the 4th-year forward got no calls in this game. Despite going hard to the hole, instead of settling for the long-jumper, Melo could not get a nod from the referees. With just over six minutes left in the first half, the league’s second leading scorer was still just 1-9 from the field.

“These refs are gonna make sure the Spurs win this game!”

At this point, the two teams were still shooting the same percentage as they had in the first quarter; 33% and 29% respectively.

Duncan is starting his bitching. Immediately, it pays off. First a phantom call is made against Camby, and on the other end an obvious “over the back” is ignored keeping the possession with the Spurs.

The action culminates with the Spurs putting together a 14-6 run stretching their lead to 15 points.

As became the norm in the game (and potentially for the series), the Nuggets were great at the end of quarters. With just over a minute left and the Nuggets still down 15, Camby and Anthony combined for seven quick points to cut the Nuggets’ halftime deficit to just eight, at 49-41.

Duncan is dominating off the bat, despite great instances of one-on-one defense by Nene and Camby. When the Nuggets made a move to double him, Duncan fires a great cross-court pass to Bruce Bowen for a three-pointer moving the lead back to 14.

Nene again, is keeping the Nuggets’ offense on track seemingly scoring at will. As the Czar astutely pointed out during the Brazilian Beast’s fine play, “Nene is just not afraid of Duncan.”

Iverson is getting into the lane with no problem, but is still having trouble getting his shots to fall.

The Nuggets again make a nice run to end the quarter before the Spurs hit a late-3 making the difference 14 at 74-60.

“I’m surprised that Ginobili didn’t fall over with that one!”

Midway through the final quarter, as the 6’6” Argentine swingman makes a circus shot in the lane; my dad’s irritation begins to obviously boil over. Not the most popular man in Denver, Ginobili puts together a brilliant run, scoring 14 of 15 points as the Spurs keep their lead in double-digits.

“You just knew there was no way Denver was going to win the second game. The NBA would never let them win both games!”

The topic of conversation turned to the salary cap issues that the Nuggets will face in the off-season. The general thought, is that one of the two big men (Nene or Camby) will have to be let go in order to avoid a serious luxury cap hit. The question would have been a no-brainer earlier in the year, but with Nene’s progress, the elder Camby now seems to be the one “left out.” My dad made his thoughts formal, after Nene goes baseline and finishes with a thunderous reverse bang.

“We don’t need Camby! He wouldn’t have made that! (FORESHADOWING) He is just a strange hybrid between a center and a forward. He just wants to block shots and shoot that set-shot from the top of the key. He has no place in the NBA!”

With just under six minutes left in the game, and the San Antonio lead at 11 points, the Nuggets start slowly making a move to get back into the game. After a Melo 3 and a jumper by guard Steve Blake, the Nuggets find themselves down just eight with still four minutes left on the clock.

After an Iverson 3 and a defensive stop, the Nuggets are down just six. With about two minutes remaining, a great “penetrate and dish” by Iverson is ruined when Camby blows a wide-open dunk.

With just over a minute left, Iverson hits his patented floater in the lane, to cut the Spurs’ lead to 89-85. My dad notes that it should be just two if Camby hadn’t blown that dunk.

Duncan comes up big down the stretch hitting a bug bucket, despite solid defense from Nene.

To his credit, Iverson was HUGE down the stretch. He was also mysteriously absent from the free-throw line the entire night, hoisting 25 shots, but earning nary one trip to the charity stripe.

The Spurs, in the words of their Coach Gregg Popovich, “hang on for the win.” Like the proceeding ones, the Nuggets won the battle at the end of the quarter, possibly reflecting San Antonio’s geriatric tendencies. Despite having a far superior bench to the Nuggets (any day fellas! Najera, JR, Linas) the Spurs look considerably worn down towards the end of the game, thus their coach’s response.

Will this become a factor with the series moving to elevation for the next two games? Can the Nuggets hold court in Games 3 and 4, despite having one of their worst home records in years? Will my power/water/internet be back up for Game 3?

Luckily for me, the latter inquiry should be irrelevant as I will have a seat front and center for that one.