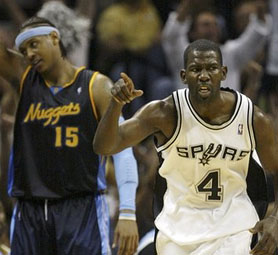 You know you’re victorious if……

You hold your opponent under 80 points.

That opponent averaged over 105 per game during the year.

You hold your opponent to under 38% from the field.

That opponent shot 47% from the field during the year.

You hold your opponent’s superstars to a combined 41 points.

Those superstars averaged 56 a night during the season.

Those two are able to be guarded (at different times) by the same guy.

Your core group of players has been together for more than five years.

Your opponent’s star guard shoots just 36% for the series from the field.

Everything on the offensive-end comes easily.

Your opponent has to work very hard for every shot attempt.

Your opponent’s offensive bench production comes from someone who played all year in Italy.

That guy on the other team that you cannot stop doesn’t seem to get the ball very much.

That very same guy barely gets ten shots a game while averaging over 15 per contest.

Your opponent cannot make shots around the hoop, as well as the subsequent tip-in attempt.

You win four games before your opponent does.

Yes, the Spurs have advanced after last night’s 93-78 victory over the Nuggets.

Yes, the series went just five games, exactly like their first-round series did from two years ago.

Yes, the Nuggets were proven to be “not ready for primetime.”

AND, YES, I think the Spurs must now be considered one of the favorites for the LOB trophy.

Before the postseason started, I had thrown my “eggs” into the Phoenix basket, but I may have to share and hedge my bets on this upcoming series between them and the Spurs.

For the record: The Big Papi/Urlacher Vitamin Water commercial, I liked; the Tracy McGrady one, not so much.  It made me a little uneasy watching Mac toss a CGI-ed sheep across a worn-out pitch.  Is PETA gonna cause a stink?

This season, Carmelo Anthony has really made some huge strides.  While he was no more brilliant than he was all season long for the Nuggets, the fourth-year forward finally made a name for himself in the postseason.  In Melo’s three previous trips to the playoffs, he contributed 18 ppg and just over 6 boards a night.  This postseason, Melo was the Nuggets’ most consistent player dropping 27 and 9, while shooting just slightly under 50% from the field.  What’s maybe the most impressive is the fact that not only did he have Bruce Bowen in his jock, but there was also often one or two other Spurs helping out.  If you watched the games in this series, you know what I am talking about.  Another sign of his growth has been his development from behind-the-arc.  In his three previous postseason runs, Melo had hit just 13% of his long-range attempts (2-15).  In this Spurs series, not only did Melo hit exactly 50% of his 3’s, but he made at least one each game and put up 18 for the series.  He also averaged over 3 offensive rebounds a night, too.  This kid is still just scratching the surface, believe that.

I will have plenty to say about the Spurs in this space in the upcoming month, so I spare you the analysis.  I will, however, conclude by looking ahead to the Nuggets’ future, one the league’s brightest.  This year, this squad, was simply outclassed by a better TEAM.  The Nuggets aren’t there, yet.  I do expect great things from this squad next year, even if one of their bigs (ie Camby) is no longer on the roster.  Yes, the luxury tax is going to hit this team like a “Pretty Boy” combo. With AI, Melo, Camby, Nene, and oh yes, Kenyon Martin’s monstrous contracts increasingly rising, Nuggets’ owner Stan Kroenke will be faced with the “Dolan Dilemma.”  Cough up the jack, or got off the pot—not that kind, although I think Jimmy D. has had those types of issues, as well.

The Nuggets obviously need long-range assistance (ie someone like Michael Finley) but I hope they stick with JR Smith.  The youngster got into some hot water towards the end of Game 4 when he defied the team’s time-out plan by jacking up a couple unwarranted 3’s.  I like the kid, though.  His (sorry for using this team) “upside” is gargantuan, and the Nuggets might ultimately regret unloading him.  Similarly, earlier in the season, everyone around Denver was more than ready to dump Nene and that “beastly” contract he penned last summer.  Still want that Nuggets’ fans?  The Baby Blue and Gold have to be considered the early favorites in the Northwest, as well as one of the West’s true heavyweights.

I will return later next week as we look ahead to the second round match-ups.  I will be more than curious to see if the Spurs can do to the Suns what they did to the Nuggets.