Deron Williams Agreed to Play in Turkey During NBA Lockout 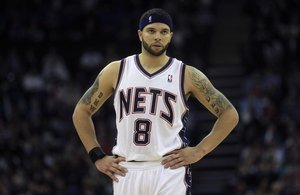 Sooner or later, a high-profile NBA player will ink a deal with an international squad to keep the paychecks coming in during the lockout.

And according to a Turkish media outlet, that day may already be here.

Ball in Europe has the details:

Turkey-based sports news outlet NTV Spor announced today that Deron Williams of the New Jersey Nets will be joining the TBL club for the 2011-12 with an out clause, should the NBA lockout end.

It’s not explicitly clear yet if NBA players can actually sign with teams in other leagues during the current work stoppage. For the time being, there’s also no telling just how reliable this report about Deron Williams having an agreement in principle to head over to Turkey is.

UPDATE: Several news media outlets have confirmed the Turkish TV report that DWill has agreed to a deal, and Williams may have an NBA teammate or two join him across the pond. Wild times.