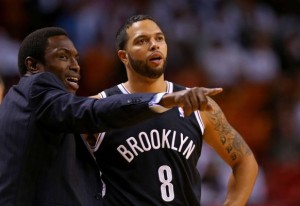 A deeply frustrated Deron Williams is searching everywhere for answers.

The Brooklyn Nets’ star point guard, putting up the worst numbers since his second year in the NBA, has gone from saying his issues are mostly mental, to blaming his head coach for his struggles.

According to D-Will, currently averaging 17 points, 8.3 assists and only shooting 38.8% from the field, Avery Johnson’s offense hasn’t helped his game. Williams says he prefers the system Jerry Sloan ran in Utah.

Since coming to the Northeast, he has eroded in nearly every facet of his game. His scoring has declined, and his shooting percentages have plummeted. […] Injuries may be partly to blame. But as the Nets prepared to host the Jazz on Tuesday, Williams listed another factor: the playbook. “That system was a great system for my style of play,” Williams said of the “flex” offense run by Utah Coach Jerry Sloan. “I’m a system player. I love Coach Sloan’s system. I loved the offense there.”

Williams was widely blamed for Sloan’s sudden retirement in February 2011, just before the Jazz traded Williams to the Nets. And his openly pining for Sloan’s system could be viewed as subtle criticism of Coach Avery Johnson’s offense. Williams did nothing to discourage that interpretation when he was asked to compare the offense used by the Nets with the one he ran in Utah. “Is it as good as there? No,” he said. “There’s just more one-on-one and isos” in Johnson’s offense.

While saying that he will eventually adjust to the Nets’ iso-heavy system, Deron Williams added that in both high school and college, his teams ran motion offenses that featured plenty of movement which allowed him to thrive.

Avery Johnson thinks time is on Deron Williams’ side and that he will snap out of his funk. And though that may very well be the case, there’s no denying that things will be considerably more tense in Brooklyn going forward.