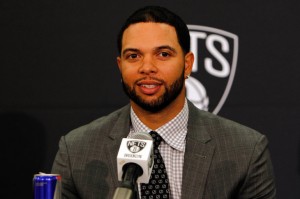 According to Deron Williams, one of the biggest reasons he’s not a Dallas Maverick today, is that Mark Cuban didn’t show up for a meeting.

This did not sit well with D-Will, who felt that his questions about the direction Dallas was taking were left largely unanswered.

“Of course (Cuban’s absence had an effect),” Williams said. “My top four when I was coming out of high school was Illinois, Georgia Tech, Tennessee and Maryland. “Maryland told me they wanted me to come on a visit but Gary Williams wouldn’t be there. So I told them, ‘It’s okay. I’d rather not go.’ So that was that. It’s similar.”

“I think (Cuban) would have been able to answer a lot of the questions me and my agent have for him that really didn’t get answered that day pertaining to the future,” Williams said. “And I think if he was there he would have been able to answer those questions a little bit better. It maybe would have helped me. (I wanted to hear about) the direction of the future of the team, other than Dirk — players they were thinking about. Everything was basically just about their track record, trust their track record, which is, you know, I can honor that, because they do have a good track record, but it’s not enough for me, especially when (Nets GM) Billy (King) was updating me daily.”

After losing out in the free agent chase, Mark Cuban famously countered that the Mavericks are better off anyway without Deron Williams, which is beyond hilarious.

It’s hard to imagine that a face-to-face meeting with the Dallas Mavericks owner would have been enough to sway Deron Williams enough to walk away from everything the Brooklyn Nets were offering — $99 million over five years instead of what Dallas could offer ($75 million over four years).