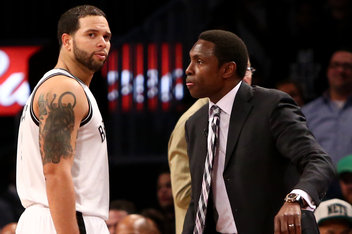 It was a terrible day for Avery Johnson and his family in many ways — not only did he suddenly become unemployed, Johnson’s son angrily melted down on Twitter, and to top it all off, it was also his wife’s birthday.

As soon as news broke of Johnson’s firing, most of the finger-pointing was directed at point guard Deron Williams, who has criticized his former coach‘s offensive system in the media.

According to Williams, the firing came as a total surprise, and he says that the two men had a good working relationship.

Just like in Utah two years ago, when coach Jerry Sloan retired following a reported rift with his point guard, Williams was blamed for the departure of Avery Johnson, who was abruptly fired Thursday morning by Nets owner Mikhail Prokhorov.

“I was surprised,” Williams said. “I never had any conversation with (GM) Billy King about not liking Coach, nothing about Coach Johnson. Avery was a big reason I came back, because of him and Billy. So I was surprised. We’ve never had an argument, we’ve never had a fight, any disagreements, anything. So, I think it was more kind of what happened in Utah, people still saying I got Coach Sloan fired even though he resigned and that’s going to stick with me for a while.”

Avery Johnson, who took the unusual step of attending the press conference announcing his dismissal, backed up Williams’ claims about their relationship, saying they never had any major issues. But there are reports about a fractured relationship (with Williams and others) behind closed doors. It also didn’t help that Johnson was angling for a contract extension, which ownership wasn’t willing to grant.

With Avery Johnson out of the way, and until owner Mikhail Prokhorov convinces another big name to take over the bench, the increasingly harsh glare in Brooklyn will remain fixed not only on Deron Williams, but also GM Billy King who assembled this very expensive, underachieving Nets roster.