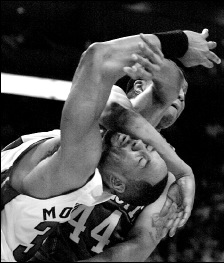 Continuing today’s exhaustive coverage of NBA players that were awesome in the 1990s — from now on, maybe we should make Friday’s Old School Fridays? — we can’t let this story slide about the latest player to move from the hardwood to the boardroom: Derrick Coleman!

When we last saw DC, he was…well, actually, does anyone remember last seeing Coleman? A former All-Star as a member of the Nets, he went on to play in Philly, then Charlotte, then Philly again, and the put in a few months with the Pistons before quietly stepping away from the game in 2005. (The picture to the left is from the Charlotte era, of DC giving Zo a two-piece.)

But he’s back! And he has suits and ties and pants with him!

That’s right, Derrick Coleman is running a clothing store in Detroit, with plans to expand it even further as the years go on. Judging by some of the fashions on display in the photo with the story, looks like DC is the Mr. Roarke of the place.