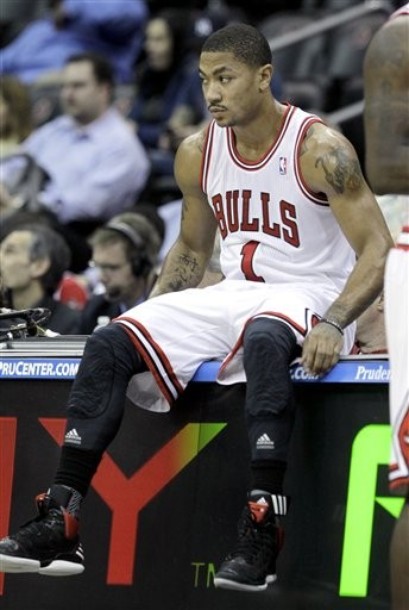 Derrick Rose, admittedly, was down in the dumps after the Miami Heat eliminated the Chicago Bulls from the Playoffs last year.

The reigning MVP blamed himself for his team’s flameout in the Eastern Conference Finals, and was in a desperate search for answers: how could he ever get the Bulls over the championship hump, especially given just how rarely point guards of his size carry their squads to the NBA’s promised land.

Rose turned to Isiah Thomas, someone who might be able to provide him with some answers. Derrick asked his fellow Chicago native – a man who went through his share of postseason heartbreak – how he managed to win titles.

Isiah Thomas said he met Rose last year after a game in Detroit and that Rose contacted him after the Bulls’ season had ended. “He was pretty down,” Thomas said. “He asked me ‘How did you do it? How did you win back-to-back championships at this size?’ And my response to him was that once you understand your opponent and know your opponent better than you know yourself, you’ll win.” […] Rose understands Thomas’ historical standing in both Chicago basketball and the NBA. “… He’s somebody where in Chicago, you definitely got to look up to, especially being a guard, winning championships in this league,” Rose said. “[I] try to take things out of his game and put them into mine. But [he’s] a cool dude. I played against his son in AAU. And he’s from Chicago so I got to look up to him.” “It’s hard to pattern your game after somebody that’s great like that,” Rose said. “If anything, he was a winner. His will to win, no matter how big he was on the floor, he was a small guy, but his passion for the game and how dedicated he was to playing the game.”

“He’s very courageous,” Thomas said of his fellow Chicago native. “You’ve got to be courageous and you’ve got to make sacrifices in terms of your body to have success as a small man in the NBA and to win championships. And I emphasize win championships, because you can pile up statistics and great numbers playing a non-aggressive style and have a great career. But if you want to win championships, you have to pay the price and Derrick is definitely paying the price.” […] Thomas said any talk of resting Rose in an effort to protect him from injury is foolish. “I have a West Side mentality, and that is you’re either fighting to get it or fighting to keep it,” he said. “But make no mistake about it, you are always in the fight. … You want to sit me down and coddle me?”

Media and fans today treat Isiah Thomas as a punchline, endlessly pointing out his shortcomings as an NBA executive and coach. But for players in the League, he represents a living legend, someone whose guidance is to be valued. And, of course, they’re right.

Derrick Rose should take Isiah Thomas’ advice, but one thing remains inescapable: Zeke had a considerably more complete Detroit Pistons team than Rose does now in Chicago when he won back-to-back championships in 1989 and 1990.