Derrick Rose Blames Himself for Bulls’ Loss to Heat 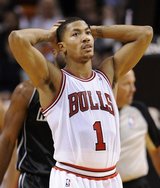 The truth of the matter is that were it not for Derrick Rose’s acrobatic heroics in the fourth quarter, the Chicago Bulls wouldn’t have even been in position to steal a win from the Miami Heat yesterday afternoon.

Unfortunately for Rose and the Bulls, all anyone will remember (including Derrick himself) are the two missed free throws late in the contest which would have given Chicago the lead with 22 seconds to go, and the resulting defeat that seemed to momentarily crush Rose’s spirit. He beat himself up following the loss.

He looked downward glumly. He swore. He referenced a higher power. Rose didn’t cry, although his voice caught during one answer, he stopped to compose himself during another and who knows what happened before reporters were allowed in the locker room.

“It’s definitely tough,” Rose said. “All I can say is, I guess God does everything for a reason. To miss both and let my team down, the only thing I can do is learn from it. This is so unreal. I had a chance to change the game. This time, it didn’t work out. I know my will to win is still very high. I guarantee you next time those shots are going down.”

This is familiar territory for Derrick Rose. He blamed himself last year when LeBron James and the Miami Heat ousted the Bulls from the Playoffs, and went into a long emotional funk before vowing to return stronger than ever before.

Until the Bulls figure out a way to come up with real answers for Miami, especially come Playoff time, the pain will not subside.