"This year it’s all about making the Playoffs and seeing how far we can go." 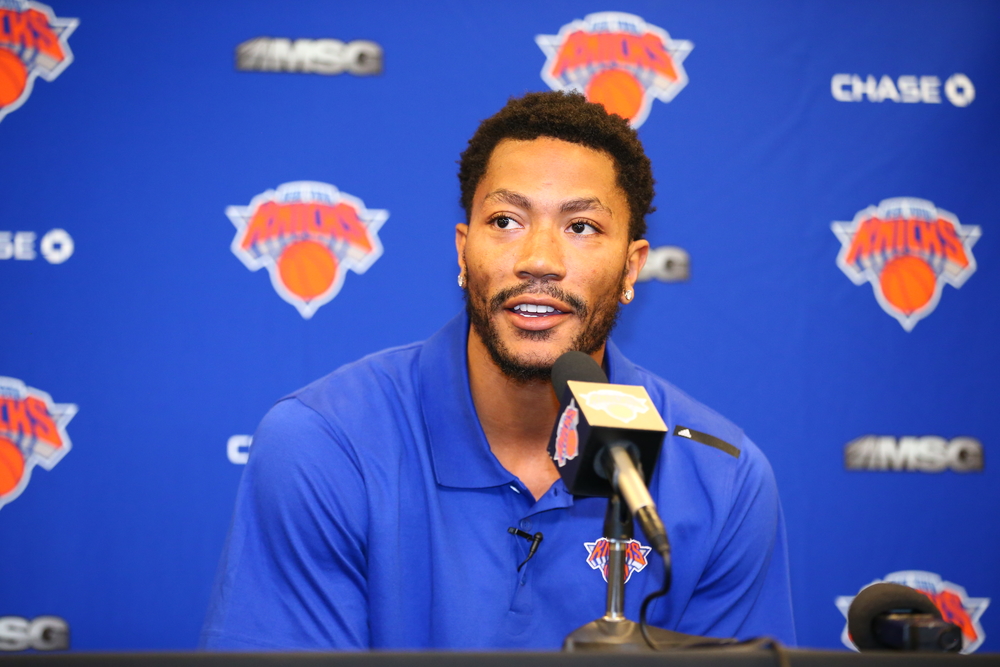 After spending the last eight seasons in the Windy City, Derrick Rose was traded from the Chicago Bulls to the New York Knicks in exchange for Jose Calderon, Robin Lopez and Jerian Grant in June. Over the next few months, as Rose gets acclimated with his new team, the 2009 Rookie of the Year and three-time All-Star says he’s out to prove that despite the injuries that have limited his time on the court to 166 games since 2012, he can still be in the discussion as one of the top guards in the L.

We caught up with Rose at the Forum in L.A. during the Call of Duty XP event to talk Knicks, Drake, super teams and the evolution of Call of Duty. Check it out:

SLAM: As you enter training camp, what’s your mindset going to be like with this new group of teammates?

Derrick Rose: Pushing people, you know? Just pushing guys to be great. We know that we need each other and know that we can’t anywhere without one another. It’s all about us just coming together quick, jelling quick so that things can be smooth. But in the beginning it may not be like that. It may be rough, but I think with the guys that we have and the talent that we have on the team, we’ll figure it out.

SLAM: What does it mean to you for Carmelo Anthony to say the Knicks’ move to acquire you was a “good first step” despite a lot of people counting you out due to the injuries?

DR: I think they know my resume as far as [how] I’m willing to do anything to win. I don’t have any problems in the locker room or never have been that guy. They know that I’m just a good dude. I feel like it’s a blessing and an opportunity to go there and play in a city like that.

SLAM: Have you thought of what your emotions will be like when the team plays the Bulls on Nov. 4 and you’re in the United Center wearing blue and orange?

DR: No, I haven’t. Me and Jimmy [Butler] talked about it a little at the Dodgers game a couple of days ago, but we really ain’t get into detail about it. I haven’t really thought about it like that. Even when I play them, it’s not going to be a revenge-type game. I hate playing that way. That’s not the way that I’m used to playing, so when I go out there I’m just going to try and win that game.

SLAM: Drake recently brought you out at Madison Square Garden. How did that come about?

DR: We just went to the concert. Whenever Drake is in town at the same time I’m in town, I’m getting a ticket for sure. I just went and I think one of his friends or somebody saw me and my son in the stands and they asked us to come on stage because Drake wanted us to come up there. I thought it would be pretty cool for my son PJ to experience something like that because he’s a Drake fan. [Laughs] So I thought it would be something cool for him. 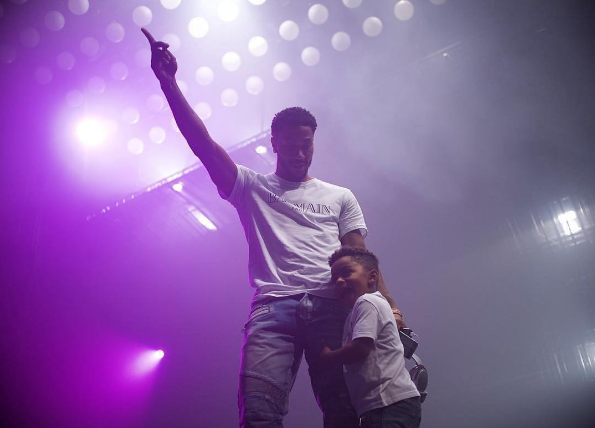 SLAM: What was PJ’s reaction like after you guys left the stage?

DR: He’s made for that, man. He’s totally different than I am. Me, I’m laid back, nonchalant, I’m chill. He’s totally the opposite, that’s the crazy thing about it. He’s kind of shy but he’s way more ready for the light than I am, especially at that age.

SLAM: Drake, Meek Mill, Kanye West and other rappers have dropped your name in songs over the years. Is there any namedrop that’s your favorite?

DR: I don’t got no favorites, man. I just feel like it’s an honor that people even put me in songs just because I can hoop. And it’s not like I’m boasting or bragging about the way I hoop, I just see it as God’s gift. I let it come off natural and I let my game speak for itself, but to be mentioned in any song is publicity, and any publicity is good publicity, especially when it’s in the light of positivity. I appreciate all the love that I get and all the love that I’ve gotten in the past. Hopefully I get some more.

SLAM: In an interview with NBA.com, you mentioned it being hard to play against Kristaps Porzingis because of how skilled he was for his size. How’s it going to feel now that he’s your teammate?

SLAM: Speaking of teammates, Joakim Noah also joins you in New York. How does his tenacity and grit on the court help the team in its rebuilding process?

DR: We needed someone like Jo, that was one of the reasons why I went after him. I think with any championship team you need size and length, and we have two 7-footers starting now—KP, we got Jo, Melo at 6-9, Courtney [Lee] at 6-5, 6-6, and we have myself at 6-2, 6-3. That’s kind of a big squad, so you add in that and the size of the squad and the four of us—not including Jo—but me, Melo, Courtney and KP…we could all score above the rim. Jo’s job is to bring energy and score here and there, and to really mess up the game if he needs to by using his work ethic.

SLAM: What are some of your personal expectations for yourself this season?

DR: I have mine, but I just want to win, man. I feel like winning and having fun—those are the two goals I want to get next year where I have a winning season because last year I didn’t make the Playoffs, so I can’t say shit about that. It’s over. This year it’s all about making the Playoffs and seeing how far we can go.

SLAM: You recently made comments regarding the Knicks being a “super team” and you firmly believing the Knicks can win all 82 games that had many thinking you were delirious. From a competitive standpoint, why’s it necessary to have this approach to things?

DR: I mean, I’m competing against these guys everyday and every night. I’m in the same League as these guys. I know that’s not them saying it and it’s the media, but it’s like, I’m in the League too, you know? I work just like the players work on that team. We got a great team—why couldn’t we be a super team and why not label us a super team? It’s always different when I say stuff, so I think it rubs people wrong ‘cause of my confidence or whatever. And 82 games—I said there was a chance that we can win 82 games. It’s not that we’re going to win 82 games. It’s rare that you can have a team on an NBA floor and have a chance on winning that game right when you step on the floor. I’ve played on teams where I’ve stepped on the floor and it was like, How we going to win tonight? Having that thought in your mind like, How are we going to pull this one out? When we were playing against the Lakers, when we were playing against Boston when they was really good with KG and them—like, How are we going to win these games? So now that I’m on a better team, it’s like, alright, when we’re stepping on the floor we got a legit chance of winning this game tonight.  Now we got to go out here and see what’s going to happen and find a way.

SLAM: Can you share your thoughts on what it feels like to be a part of the same organization as Phil Jackson, knowing the success he’s had with the Bulls and Lakers?

SLAM: Being that you’ll be living in New York, what’s something you feel like you need to do that you didn’t do before?

DR: I think I may be able to ride my bike a little bit more because I’m living in the Tribeca area. In Chicago, I couldn’t do that. I could go to restaurants a little bit in Chicago but I couldn’t walk around like I wanted to. In New York, I’m taking it as a business trip still and this first year I just got to get it under my belt.

SLAM: What’s it like to see the evolution of Call of Duty over the years?

DR: It’s been pretty dope. I’m not going to sit here and talk to you and say I’m a real, real gamer, but I play a lot. I loved it ever since they threw in the zombies, to tell you the truth. And when they started doing it where you could kill zombies that changed my mind a bit. Then I started playing it a lot more than the previous years.

SLAM: Do you play more Call of Duty at the crib or on the road?

DR: Me and all my friends, we got a PlayStation and we move it from every room in the house depending on who’s in the house or who’s traveling. It’s always moving around and we play a lot and gamble a little bit, too, so that’s a lot of fun especially when you’re winning money. [Laughs]

SLAM: So you have a gamer tag for fans out there that want to play online with you?

DR: I go through my friend’s name and I don’t know his like that, but I play all my games through his system ‘cause he always brings it.