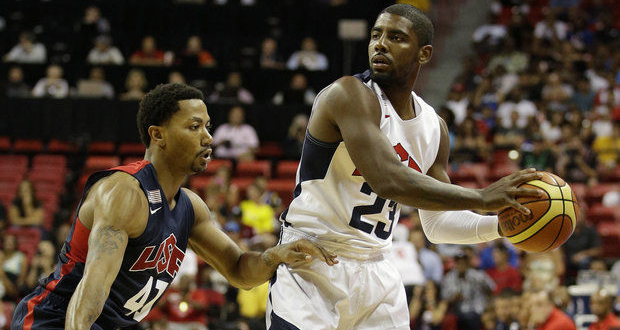 Kyrie Irving will get the start Tuesday night against Slovenia, as Team USA plays its final tuneup game before the FIBA Basketball World Cup kicks off this Saturday in Spain.

According to head coach Mike Krzyzewski, Irving and Derrick Rose may end up splitting starts at point guard throughout the tourney. Per ESPN:

“We’ll see as thing goes on,” Krzyzewski said after Monday’s two-hour practice. “We might alternate ’em. Both of them are going to play significant minutes.”

“I asked him today, and he said, ‘I feel great,'” Krzyzewski said of Rose. “He did everything. He’s full go. I think there’s a part of him that’s like: ‘Quit asking me how I feel. I’m good.’ So I’m not going to ask him anymore.”

Team USA arrived in Las Palmas early Sunday morning and held a two-hour practice Monday after voluntary workouts on their first afternoon in Spain. Going forward, Krzyzewski said, all practices will be noncontact amid a schedule that calls for five group games in a span of six days. The focus from here, when Team USA can get on the practice floor, will be on offensive and defensive execution and working on new wrinkles like starting center Anthony Davis’ cameos at power forward.