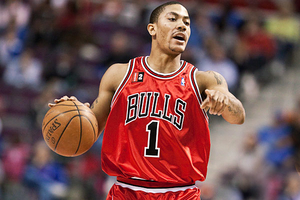 After going down with yet another devastating, season-ending knee injury, fans and media called for Derrick Rose to alter his game. The thinking being that by attacking the hoop with less reckless abandon, Rose could prolong his career.

The former NBA MVP says he won’t (and can’t) change the way he plays.

(Despite the Chicago Bulls ruling him out for the remainder of the year, the ever-defiant Rose won’t close the window on a possible return in the Playoffs.)

“I could get hurt 10 more times — I’m never going to stop,” Rose said when asked if his knee injuries might affect the way he plays. Rose acknowledged that his style of play could have made him vulnerable to injury. “I play a unique way of playing basketball,” Rose said. “I can’t change that.” Asked about people who say the Bulls should consider moving on without him, Rose said, “You can be a fool if you want. I know I’m going to be all right. … I believe that I’m a special player.”

Rose responded to a question about the possibility of returning for the playoffs, even though he was told two weeks ago that there is virtually no chance of that. “If I’m healthy and the situation is right, I’m going to be back playing,” he said. “If I’m healthy and my meniscus is fully healed, of course I’ll be out there playing, but if it’s something totally different and the outcome is not how I would want it to be, it’s no need.”

The superstar point guard added that his recovery from this particular injury should be quicker and easier than the one he underwent last season, since it’s not another torn ACL.

For better or worse, Derrick Rose believes he will be the same player when he returns.