Derrick Rose to Suit Up vs Puerto Rico 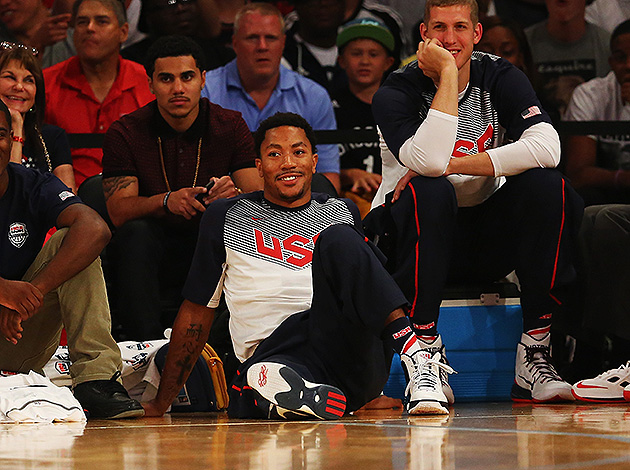 After sitting out Wednesday night’s rout of the Dominican Republic, Derrick Rose will “try to put on a show” Friday night in an exhibition game against Puerto Rico.

Rose told reporters in New York Thursday that he’s feeling good after going through a non-contact practice, and that he could have played against the D.R. Per ESPN:

Rose, who is working his way back from surgeries on both knees, had not practiced since playing 24 minutes and scoring seven points in Team USA’s 95-78 exhibition victory over Brazil on Saturday night in Chicago. It was Rose’s first game action since Nov. 22, 2013. He has appeared in just 10 games over the past two seasons due to injury.

“I’m feeling good,” Rose said. “I’m gonna give it a go tomorrow and see how it goes, and I’m just trying to stay positive until then.” […] “I could’ve played, but there’s no point when you can get a little bit more rest, so that’s all I’m trying to do,” Rose said.

“If I can play, I’m gonna play — no matter when it is or how many games it is,” Rose said. “If I’m healthy enough to play, I’m gonna play. I’m not worried about that. With all the training that I’ve done in the past, I think that I’m prepared for it. It’s just that right now I’m trying to get my legs under me a little bit more, and we won by 40 yesterday, so there wasn’t any need — no disrespect to the other team.”