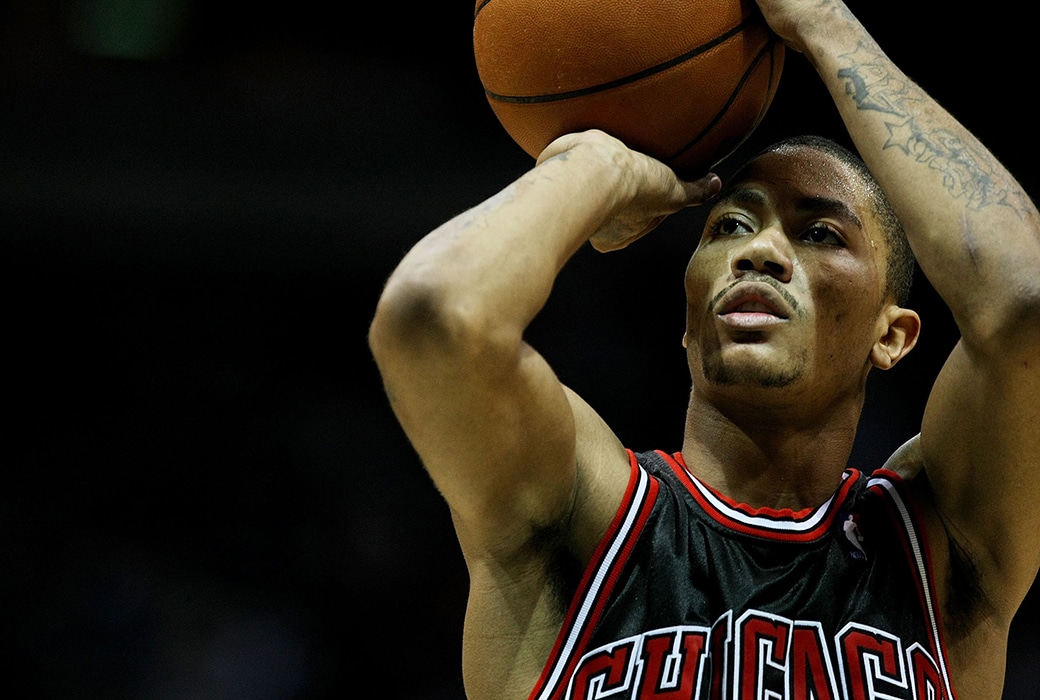 If Derrick Rose has a vice, it’s his sweet tooth. Thus far, being a candy freak hasn’t hampered Rose on the court, but he knows some of those sugary snacks will have to go. Since entering the League, Rose has tried to eat more fruit than Gummi Bears, but coming off the habit hasn’t been so smooth. On a December road trip, Rose sent himself to the hospital with a 10-stitch gash in his right forearm after pouncing on his hotel bed and landing on a forgotten cutting knife he used for an apple.

He laughs off the incident now, but his teammates still clown him from time to time about his sugar addiction.

“Man, this is the biggest candy head I’ve ever met in my life. He likes anything candy—sugar sandwiches, syrup sandwiches,” Tyrus Thomas chuckles in the locker room to Lindsay Hunter. “Shit, if you come out and perform like he performs, I’d let you eat rocks if you want to.”

And perform, he has. Through his first 60 games, Rose has put up veteran numbers to complement his vet-like minutes—16.6 ppg, 6.3 apg, 3.6 rpg in 36 ticks. His stranglehold at the top of the ROY race hasn’t loosened as he continues to take the League by storm.

Derrick “Pooh” Rose came up in the southwest Chicago neighborhood of Englewood, spending most of his time playing basketball in the streets. His earliest hoop memory is of his older brothers playing high school ball at the local high school gym. A 7-year-old Rose would religiously spend time there, learning from his brothers and playing against people twice his age: “I played all the time. All my brothers played basketball. I grew up playing basketball. So it ran in my blood.”

Hoops was, and still is, a large part of the Windy City culture. While the Bulls were winning threepeat after threepeat, more and more kids and adults turned from football and baseball to basketball. Elementary school students around the city came to school in red and black Jordan, Pippen or Rodman jerseys, and when the biting winter came around they would throw on Bulls Starter jackets. Derrick wasn’t one of those kids.

“I never had a jersey,” Rose remembers. “The only thing I had was a shirt that my mom bought on the street of Michael Jordan when they won the championship. There was like a newspaper article on the shirt.”

Rose was much more interested in keeping a perfect record in AAU ball. The combination of playmaking skills and gravity-abusing athleticism he displayed throughout his AAU days with Mean Street Express and his prep career for the storied Simeon High program blew away Memphis Coach John Calipari. That “motor,” as Cal calls it, had the coach in awe, but something else really grabbed his attention. “What amazed me was that he lost an AAU game and he cried,” Coach Cal recalls. “I’m like, If winning means that much to him, I’ve got to get this kid.”

Sure enough, the all-everything guard from The Chi moved 526 miles south to Memphis. As a Tiger, Rose learned how to balance his offensive game and throw the perfect lob pass. He demanded the ball in close games, leading his veteran team to a record 38 wins. As the season progressed into its final month, Rose was getting more attention than ever as the Tigers battled toward the NCAA Championship.

“He hates to hear about himself in person and he hates to see himself on TV,” Calipari continues. “We’d be on the team bus, watching satellite TV. The highlights would come on, and it had Derrick Rose. We’d all look at it and he’d put his head down. He would not look at the TV screen.”

Rose was at his best at the end of the college season, tearing apart top point guards like DJ Augustin (in the Elite 8) and Darren Collison (in the Final Four). “So I get up to speak about him,” Calipari explains. “We’re up there, three players and myself. They said to me, Coach, can you tell us about Derrick’s effort and what he’s meant? Derrick puts his head down and goes, ‘Don’t Coach, just don’t. Just don’t do it.’ He’s whispering to me with his head down: ‘Just don’t.’”

What’s most amazing is that after the Final Four, the No. 1 overall pick, several endorsement contracts and two straight Rookie of the Month honors, Derrick is still the same person he was in high school. When his sweet tooth is satisfied, he’ll enjoy pizza at Home Run Inn in Chicago, where he’ll order a plain, thin-crust cheese pie. Chicago is known for its deep-dish, and Home Run Inn has a reputation for one-of-a-kind special toppings. Rose laughs because he’s never had any of it: “I’m a basic guy. I don’t like pepperoni and all that stuff. I’m good.” Of course, he’ll cleanse his palate with a bowl of lemon sherbet. “It’s sweet, so I like it!”

It’s not common for a player as talented as Rose to come out of the tough inner city with such humble focus. “I asked his mom, ‘What did you do?’” says Calipari, “and she said, ‘There were two things I told him: You’re no better than anybody else, and remember that.’ And she said, ‘You treat people the way you want to be treated.’ And there’s no fake to it. That’s who he is.”

Perhaps because of those golden rules, Rose is thriving as a pro. Rose still won’t call for room service, and he apologizes when he sees someone looking at his expensive watch. He bought his mother a new home—a house in which he would have lived as well if it wasn’t for the distance to the Berto Center, the Bulls’ suburban practice facility.

Rose speaks in short “sentences”—one or two words if he doesn’t know you well—making sure every syllable counts. Some see this as a negative, because of the pigeonholed idea that team leaders should be vocal, Kevin Garnett-types, but the truth is Derrick already is the 1-A type, if of a different variety. He’s earned the reins of every team he’s played with by giving—he finds his teammates, does whatever is necessary to win and, in turn, wins his teammates’ trust and respect.

It’s been more than a decade since the Bulls had an All-Star, and the losses have piled up since Michael Jordan left town. Fans know better than to hope for another MJ, but many believe Rose can lead the Bulls back into championship contention. That’s a lot of pressure on a kid from the Windy City, who listened to the moaning and groaning of Bulls fans for the past decade, right?

“No. Not at all,” Rose explains. “You hear about it, but there’s nothing you can do but go out there and try to play hard. You know people are going to talk. Either way, you’re going to have somebody bullying you or saying something about you. So we just got to go out there and play hard no matter what people say or what they do.”

It might actually help that Rose paid little attention to the Bulls, the replica jerseys or the Js on everyone’s feet. “I watched [the Bulls] a few times when my brother was in the house watching the games. I was a Bulls fan,” Rose continues, “but I really wasn’t into the NBA like that. I just knew I loved the sport, but I wasn’t like a big NBA game watcher or anything.”

Derrick couldn’t miss the breeze Jordan created in the Windy City, however, and he hopes he can bring back the buzz. But in terms of whom he sees his game resembling, Rose hopes to be more like Steve Francis in his prime. He won’t even go near any comparisons just yet: “Steve had everything. I’m not that creative.”

Not long ago, Francis was the future jewel of the League’s point guards. Earlier this decade, Francis displayed the complete package—leading the Rockets in scoring and assists while gracing highlight reels every night. Stylistically, the two are definitely similar. “Hopefully I can play up to his potential when he was playing good,” Rose says. “But it’s going to take a lot of time for that.”

Maybe not as long as you’d expect.

“Sam Cassell was always one of those guys who would always want it. I was lucky enough to coach Sam to know there’s a big difference between the guys who want it and the guys that don’t want it,” Calipari explains. “Derrick’s the same way. He will shoot the game-winner. Now, if he misses it, he may cry, but he’ll shoot the game-winner. That’s why in 15 years, he’ll be one of the greats.”

Unfortunately, the Bulls haven’t always given Rose the opportunity to be the man. Earlier in the year, Coach Vinny Del Negro benched Rose in favor of veteran Kirk Hinrich during close game situations. It took a phone call from the Bulls’ GM John Paxson in late February to remind Del Negro that Rose belonged in the game during the final minutes. Rose remained on the floor the next game against Houston and scored 16 of his team-high 22 points in the fourth quarter. “Our future is Derrick. That’s no secret,” Paxson said during a recent radio broadcast.

After losing just a handful of games in his life, adjusting to a losing season in Chicago is a challenge for Rose. Once a player who would cry after a single loss, the point guard has had to adjust his outlook during his rookie season. “Like what Coach Cal used to tell me: Try to be the best at my position. He said, ‘Don’t ever put yourself down. You can always do whatever you want.’ I’m just trying to be the best player I can. And for this organization, just trying to win championships and get us back to the place we were back in the old days.”

Rose is trying to work his way into eating healthier, which he admits will probably take hiring a personal chef and a lot more dedication. But, yes, he’s willing to forgo those Gummi Bears, Twizzlers and Nerds if it means it’ll bring the Bulls more wins. “I try to eat sandwiches—stop eating hamburgers. So I’m trying to work my way into eating good. It’s going to take a long time,” he laughs.

Longer than it has to become a great player, at least.