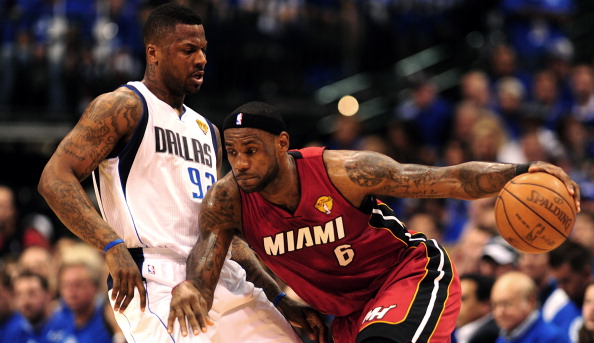 Before there was Lance Stephenson vs LeBron James, there was DeShawn Stevenson. Of all the NBA player beefs, the talent gap may have been the widest in this feud that went on for a half-decade. It’s a battle that carried over for years, through different cities and teams. It involved Soulja Boy and Jay-Z, and it peaked on the NBA’s largest stage, during the 2011 NBA Finals.

It began in Washington. After LeBron’s Cleveland Cavaliers eliminated the Wizards two years in a row, Stevenson called LeBron “overrated” before the teams met again in the 2008 Playoffs. LeBron averaged 30 points and 8 rebounds per game that season, so it wasn’t the most accurate observation. LeBron responded with an all-time great diss/metaphor, saying that he wouldn’t respond to Stevenson, because that would be “like Jay-Z responding to Soulja Boy.”

Stevenson reached out to Soulja Boy and got him to attend a Playoff game at the Verizon Center. Stephenson hit 5 three-pointers in a win, while the “Crank Dat” star mocked LeBron and looked on. LeBron responded by inviting Jay-Z to a club in DC the next night, and Hov ripped into Stevenson in a diss track at a DC club.

LeBron would get the last laugh on the court in 2008 as well. He averaged 30 points, 9.5 rebounds and nearly 8 assists as Cleveland won the series in six. That seemed like the end of the rivalry, with LeBron standing victorious with Jay-Z while Stevenson bounced around from mediocre NBA team to mediocre NBA team.

Then came 2011, and the journeyman got the last laugh. It’s funny because Stevenson played 16 minutes per game and averaged only 5 points for Dallas that season. But in the 2011 NBA Finals, he went right at LeBron and got the better of him. For one seven-game series, he was the star.

Stevenson’s ripped LeBron and the Heat constantly throughout that series. He called James and Wade “great, great actors,” after the two flopped constantly in Game 3. He said LeBron “checked out” in the fourth quarter of Game 4, and he probably would have killed Mario Chalmers if the two had actually been allowed to fight at the beginning of Game 6.

He also backed up his talk with great play. Stevenson averaged 7 points and hit 13 threes in the series, but most notable was his defense on LeBron. Stevenson pestered, hit and harassed King James into an uncharacteristically quiet Finals. He talked trash constantly and seemed to get in LeBron’s head from the second he got in in the first game. It was almost comical, LeBron James getting psyched out by a guy who would go on to play for six teams.

But it happened. LeBron averaged only 18 points per game and was virtually silent in the fourth quarter of the Finals. DeShawn Stevenson had somehow backed up his talk, and gone out on top (if by top you mean getting arrested for public intoxication two days after winning the Title).

That was pretty much it for Stevenson in the NBA. He played two more seasons after the title, one forgettable stint in New Jersey and 56 games with the Hawks in 2013. But he was never able to bring back the magic of 2011.

Today, on his 34th birthday, Stevenson is out of the League. But his legacy lives on, in Lance Stephenson and the players of today who try to get under LeBron’s skin. Between that and the banner hanging from the rafters in Dallas, that’s not a bad way for a career journeyman to be remembered.