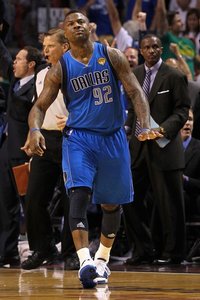 While many are happy for Dirk Nowitzki and the Dallas Mavericks finally winning a title, one can’t escape this fact: DeShawn Stevenson is an NBA champion now.

This means we must tolerate Stevenson’s antics — something that was completely unacceptable in the past — and listen to his boasts now that he’s wearing the proverbial belt.

DeShawn wore a t-shirt that was dissing his nemesis LeBron James when he arrived back in Dallas following Game 6, and says it feels great to beat the Miami Heat after the way they acted during the NBA Finals.

“It makes me feel good, man, to beat him, to beat that Miami team,” Stevenson [said]. “The way they act, the way they treated Dirk [Nowitzki], all the things that they said were very classless. To win on the court the way we did it, it was wonderful.”

Stevenson, like many of the Mavericks, did not feel as if the Heat respected them during the series. That added a little extra enjoyment to Sunday night’s celebration. “I think we did it with class,” said Stevenson, who was involved in a shoving match with Miami’s Udonis Haslem and Mario Chalmers that resulted in technical fouls for each during the second quarter of Game 6. “They tried all kind of different things and made fun of us and were on the go-karts laughing after Game 1, like they already won the championship. To beat them on their court, it feels good.“

DeShawn Stevenson and his Abe Lincoln neck tattoo are headed to the White House along with the rest of the NBA champion Mavericks next year. This is actually happening.

May God help us all.