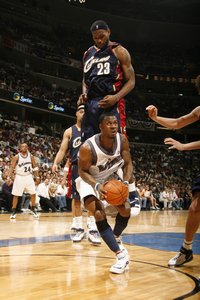 You know, it’s a good thing the powerful editor of the fashion magazine Vogue didn’t consult with DeShawn Stevenson before putting LeBron James on the cover. Because, DeShawn and his beard – who took down Cleveland on national television last night – aren’t all that impressed with King James.

DeShawn was obviously holding back in that session with reporters around his locker. When he was leaving the building, Mike Lee was chatting him up and mentioned LeBron again. DeShawn has obviously heard enough of that.

“He’s overrated,” DeShawn told Mike. “And you can say I said that.”

If anything, DeShawn, LeBron is underrated. I’m not even Ryan Jones the biggest LeBron fan around, and I can admit that much.

It was a nice win to be sure, but don’t let it get to your head. The Playoffs are just around the corner; let’s do the player rating then.