Detroit and Utah are waiting 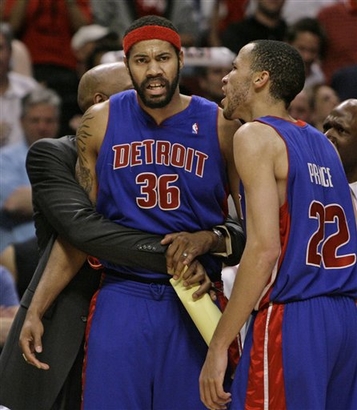 The Detroit Pistons are back in the Conference Finals for the fifth straight year. Russ wrote all about their elimination of the Bulls last night. There was cause for concern, as Detroit came close to joining a short list of teams that allowed a 3-0 lead to become a 3-3 tie. But never mind that. The Pistons should be back in The Finals soon enough. Very good season for the Bulls, and I think Russ will get into more on that later.

Cleveland and New Jersey have to come up with a winner. If you look at the big picture, study history, and apply it to the present, you would think that it’s LeBron’s rite of passage to have to go through Detroit. He even makes that joke in one of The LeBrons commercials. Jersey won’t get out of the way though. It’s really hard to see either one of those teams beating Detroit, especially now that the Pistons can rest up. I don’t know if it’s better to cheer for Jersey to bring on the decisive seventh game or to cheer for Cleveland to just put an end to an ugly series. The fourth quarters and crunch time have been particularly tough to watch. They owe us a game with intensity and a buzzer beater or something.

Seriously, does anyone think Detroit isn’t getting to The Finals? Last year their wake-up call from the Cavs seemed to have a lingering effect in the next round. Now they will be the fresher team no matter what. The most exciting draft lottery in a long time is on Tuesday. If it happens at halftime of an Eastern Conference Finals game, it will be the best reason to watch that series.

I mentioned yesterday that I was going to a MASTODON concert. It was, in a word, awesome. I can not hear out of my left ear at the moment. Very happy that today is Friday. Tonight it’s Suns at Spurs after the Nets-Cavs game. The weather is threating to cancel our company softball game. This could be a great night for relaxing with the NBA Playoffs.