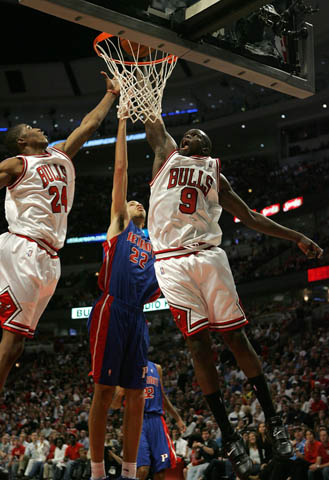 It’s Mother’s Day, and I’m out at my parents house, so you’ll excuse me for not being as play-by-play as I have been throughout the series (and the rest of the Bulls playoff run). There’s also the fact that the Bulls are down 3-0, rendering this game essentially meaningless—and the fact that they blew a 16-point halftime lead in Game Three, rendering the first half even more meaningless, if that’s even possible.

Not that I’m negative or anything.

So I’ll just be jotting down some random notes as the game goes on and give more of a postgame wrap-up afterwards (unless the Bulls lose, in which case I might just type out a laundry list of profanities aimed at no one in particular).

I missed the entire first quarter. OK, I didn’t “miss” it, but I didn’t see it, either.

Elbow jumpers to Webber and McDyess are maddening. Of course P.J. Brown hits them as well, so maybe it’s an over-30 thing. (In which case I should understand).

Deng ties things back up at 35 with a jumper from around 20 feet. He also had a very nice trailing dunk set up by Hinrich (which I believe was the 2 in the Pistons’s 13-2 run). Please, Pax, don’t trade him.

Rasheed Wallace has been tremendous this series. No question. Killer threes, solid interior defense—he’s the biggest reason why I can’t hate the Pistons entirely despite their Bad Boys/Jordan Rules lineage. It’s funny, actually—I don’t really have anything against ANY of the Pistons players, and I even respected Joe Dumars when he was playing. So…yeah, let’s move on.

NOTE: The Bulls game shorts did not make the trip to my folks house in Long Island, and I also skipped the Perrier Lime. Given that they’ve lost each game this round in increasingly distressing fashion, it seemed like the wise move. If they win this game, I’m thinking both of those items will be retired for the remainder of the playoffs. At least.

Luol as second cutter, easy two-handed dunk. And Hubie is right there to break it down. Hubie Brown is to Dick Stockton what Albrecht Durer is to the guy who draws “Ziggy.”

Rasheed needs to maybe chill on the threes for a minute.

Chicago bumps back up to a four-point lead off a Hinrich three from up top. And Ben Gordon’s only got two points so far. So technically the Bulls are in decent shape.

Bulls up seven at the half on another Hinrich jumper. He’s having his best game of the series, 15 points in the first 24. His folks are in the building, and his dad kind of looks like Eddie Sutton.

Jon Barry says the Pistons are laying in the weeds. I say I always liked Scooter and Drew better. And Brent. And Rick.

The New York Mets celebrated Mother’s Day and breast cancer awareness by using pink bats (well, some guys), pink wristbands and even pink bases. While I respect the sentiments, I’m happy that the Bulls and Pistons have left the pink at home. (Then again the Mets won, so maybe Kirk and Luol and them should track down some pink shoelaces or something.)

Chris Webber hasn’t scored in a game and a half.

And he still hasn’t. He misses the first shot of the second half, thinks he’s fouled, and shorthanded Detroit gives up a layup to Kirk on the other end. Bulls by nine.

Ben Wallace’s hair is…interesting. Sideshow Ben! It looks like he unbraided it three minutes before the tip.

Webber puts the ball in the basket, but still gets no points. Charge collected by Deng. Who gets a layup on the other end off a Gordon miss (that he rebounded himself) and the Bulls are up 11. A Piston miss, Gordon drives right back down the middle and is fouled hard by Rasheed Wallace—who immediately complains loudly to Monty McCutcheon about something or another. Timeout, Detroit.

(I wasn’t going to keep play-by-play notes, but sometimes I can’t help myself. They’ll probably just come in bursts.)

Bulls up 15 with seven minutes to go in the third. The Pistons may have dozed off in those weeds. Ben Wallace layup, lead is 17—62-45.

The Bulls have all the hustle points in the game, they’re outrebounding the Pistons in the third 12-2, and only Tayshaun has scored for Detroit in the second half. And Rasheed picks up a T. Bulls by 19 with four minutes to go.

Lindsey Hunter gets the strip at halfcourt and Flip Murray (in because Billups is in foul trouble) posterizes Kirk Hinrich who’s hoping for a charge that never happens. Ouch.

Detroit is NOT getting second looks at the basket—and their first looks aren’t that good, either. CHI-CA-GO BAS-KET-BALL. Hinrich gets two chances at the line to put the Bulls up 20, but misses both. Off a Prince miss, the Bulls run three-on-two and lose the ball to a Nocioni turnover (following a Hinrich behind-the-back pass).

Rasheed hits a pair of free throws, and Nocioni gets them all back plus one with a corner three. The Chicago lead is 20. Bulls time out with 1:21 to go in the quarter. The Pistons are three of their last 23. I’m not sure what percentage that comes out to, but it’s kind of low.

I’m not much of a marketer, but handing out white towels to fans of a home team that’s down 3-0 strikes me as a bit too surrender-ish. Maybe that’s just me.

Chris Duhon, for three. Bulls by 23. Appropriate. It’s interesting that, asked to name his five favorite point guards in one of those annoying T-Mobile promo “interviews,” Duhon names no Bulls, past or present. Hater.

And like that, it’s back to 14 as the Pistons roll off a 7-0 run to open the quarter. Tayshaun Prince, he’s good.

Rip Hamilton gets two back, P.J. misses inside, and Billups gets fouled by Brown—the third team foul on the Bulls with 9:12 to go. Yeesh. Thirteen,

Deng miss, Billups rebound, Rasheed airball, Hamilton fouled on the rebound. It’s non-shooting, but EVERY ONE FROM NOW ON won’t be. Maxiell misses from the elbow, Thomas comes down with the rebound, and gets fouled. Then he travels on the other end while trying to set his feet.

Billups gets the Pistons into the bonus (Gordon) with 8:13 to go in the game. It’s down to eleven. “Points with the clock not moving can kill ya!” Mike Tirico, master of the obvious.

Another Bulls miss, another Pistons break, and somehow they’re not able to convert. Back the other way where Thomas is fouled underneath by McDyess. He hits a pair.

Another Bulls foul sending Billups to the line. This is not a good strategy.

The Bulls get a second chance and squander it. And Billups hits a baseline jumper. Single digits. 82-73. And Thomas takes it right at Rasheed and gets another trip to the line. Good play. One of two.

Hinrich strips Billups, both Billups and Wallace fall down in the backcourt, and Kirk leaves it for a trailing Thomas, who hammers it down with both hands. Bulls lead is back to 12 with under six minutes to go.

And they pick up a defensive three-second violation. Of course. Billups hits that, but McDyess can’t convert and Big Ben gets his 17th rebound. Thomas misses on the other end, and then they get nailed with a loose-ball foul, sending Hamilton to the line. Back to nine with 5:15.

Thomas goes HIGH off the glass over McDyess, and Rip hits baseline. Push.

Thomas misses over Rasheed, who utilizes the vaunted scream defense. “Tyrus Thomas thinks this is the first quarter of a preseason game!” Thank you, Mike Tirico.

Hinrich gets stripped, Billups leads the break and gets fouled by Gordon. Back to the line, where the Pistons are nine of nine in the quarter. Make that 11 of 11. Seven-point game with 3:50 to go.

And Hinrich kicks it out of bounds. He makes up for it by drawing a charge on Billups.

Brown with a great block on Hamilton underneath, but it gets kicked back out to Billups who sinks a deep three. Back to seven. And it’s Hack-a-Ben time for the next 41 seconds. He hits the first, bricks the second. Rasheed misses a three, and Ben Gordon comes down with a big rebound on the paint. McDyess fouls Wallace again with 2:18. Once again, the first is good. Perfect. As is the second. Back to 10.

The Pistons miss a couple of chances, time keeps on tickin’, and McDyess fouls out on a Deng rebound with 1:51 left. Of course Deng misses the first just to make things interesting, then hits the second.

Deng fouls Billups on the perimeter with 1:43. Who’s trying to stop the clock here? And CB misses them both.

The Bulls almost turn it over on a terrible inbounds pass, but Deng dunks back a Hinrich miss, and this lead—finally—appears to be safe. 96-85 with eighty seconds to go.

Billups misses a deep three, and Hamilton puts it back. The Bulls, who just turned the ball over with a five-second violation, come close to doing it a second consecutive time. Is that even possible? Time out, Chicago.

They get it in. The Pistons trap Gordon, who’s fouled by Rip. Both. Under a minute.

Rasheed airballs a three that goes straight out of bounds, and Rip commits his sixth foul before the inbounds. Shot and the ball. Back to 12. Deng gets it across halfcourt against the press, and is fouled by Billups. His sixth. And while I suppose Detroit needs to stop the clock, they’d probably have a better chance of winning with Billups and Hamilton out there.

The Bulls are the first team to score 100 on the Pistons in 22 playoff games. At least I think that’s what the stat is. Either way it’s pretty impressive. This is also—barring a miracle of Millerian proportions—Detroit’s first playoff loss in ’07.

I’d love to give some kind of analysis, but it’s 2 a.m. and I’m tired (no wireless access at the parents house or this would have been posted six hours ago). The Bulls live to fight another day. The Pistons are still in the weeds. And Jon Barry can go to hell.