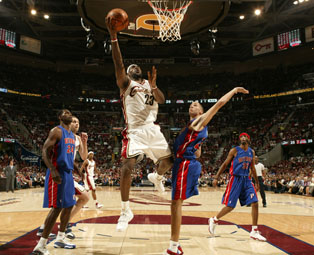 For game 3 of the Pistons-Cavs series, we had an actual Cleveland fan and SLAM contributor in the building…

Not to put too fine a point on it, but thank you LeBron for delivering what had to be every Cleveland fan’s wet dream of a game three last night. This Clevelander included.

(I know, right now you’re asking yourself, who the hell is this guy and why is HE writing about game three?! More on that later.)

For once, a player with a “C” on his chest finally showed up when it mattered, and what’s more, he even got his teammates to go along. Hell, he may have even exorcised the demons that Clevelanders have been carrying around for the Browns and Indians, too.

With 7:22 to play and score tied at 68, The Chosen One drives the lane and posterizes Sheed. That should have sent the ghost of John Elway packing. (1986)

Up by 4 with 3:51 left, the fadeaway from 17 feet boots the shadow of Ernest Byner from its spot still laying forlornly on the Mile High turf. (1987)

And the pull up jumper that puts his guys up by 4 with 16 ticks left should take care of that apparition that still hovers over Craig Ehlo. (1989)

OK, not quite. He still has to do it three more times against Detroit and then against the Spurs (sorry, Charlie, er Carlos) before we start erecting bronze statues of him outside the Q.

Clevelanders have always had a disconnect with our sports franchises – we want them to win, even cheer for them, but we’re careful to not get too close, because there’s always heartbreak in the end and not enough Prozac to go around.

But now we have LeBron.

Finally, after all these decades of torment (I haven’t even mentioned Red Right 88 or Willie Mays in ’54) Bron gives us something we never had … The Man.

This time, The Man wears wine and gold. And that’s all we care about right now.

By the way, if this post sucks a$$ then say so. But this is my first go at it, so be gentle.

Truth be told, I’m really a political reporter from Hawaii, who just happens to know Farmer Jones and begged for the credential to cover games three and four in my hometown. I have done work for SLAM before, though, most notably a piece on then-WVU stud Mike Gansey which apparently jinxed him 10 times worse than any SI covers could. Let’s hope LeBron and Co. don’t have the same adverse reaction.

Anyway, after traveling over an ocean and a continent, dealing with four airports, three flights and 15 hours of travel, I was glad to come in on the tail end of the debate on whether Rip Hamilton fouled LeBron at the end of game two. Let’s just say I’m happy to not have to dissect any such nonsense following game three.

-LeBron says he came to the Q three hours early to shoot around. He says that’s the first time he’s ever done it in his career, although coach Mike Brown wasn’t so sure, saying he can definitely recall a few times when LeBron has gone to the gym early on road games. Coach later agreed with his player. Funny how that happens.

-Gotta give the Pistons credit for sticking with the Cavs after the first quarter. Cavs seemed to outplay them, they got a few calls, the crowd was into and Z was even on the floor twice diving for loose balls. Yet they were still tied after one.

-A nod to the scoreboard operators who found ways of getting the crowd to boo during Detroit free throws by putting images of Charles Barkley on the Jumbotron whenever a Piston stepped to the line. Later on, they added a Pistons headband to Chuck’s pic. When Chris Webber stepped to the line later, the Michigan logo on the scoreboard brought out the boos. Then the operators took turns alternating a Pistons headband with a U of M headband on the Barkley pic.

-This being my first playoff game at the Q, I have no idea if that intro was the norm. C’mon, though, fire shooting out of the scoreboard?! The spectacle was blamed for the weird substance that later fell to the court during the first quarter and halted play. Apparently it was condensation on the cooling units that fell off.

-Daniel Gibson was getting props for his offense: 2-4 from the field, both 3-pointers and three FTs. His line also shows two rebounds, one offense and one defense, both of which were bigger than any of his field goals. He was credited with a block and a rebound on Tayshaun Prince with 2:56 to play after Zydrunas Ilgauskas put Cleveland up 81-76. His offensive board came with 1:04 left after a Drew Gooden miss and led to LeBron’s 14-foot pull up jumper that put the Cavs up by 4 with 16 seconds to play.

Like I said, if this post blows, let me know. I’ll ignore it, but I promise to try and do better for game four.