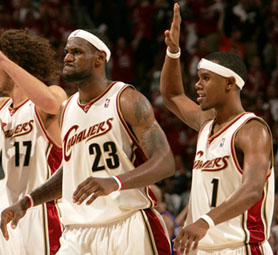 For the first three quarters, at least, LeBron and Co. certainly TRIED to hand game four to Detroit.

They even followed the script from the first two games:

–Start off with a high-energy first quarter, outshoot and outrebound Detroit and get most of the hustle points.

–The Cavs go scoreless for the first FIVE minutes of the second half, as Bron goes O-fer-the-third-quarter.

–Detroit heads into the final quarter with the lead.

And then the Cavs committed to playing basketball in the fourth — playoff basketball, even.

LeBron remembered he was LeBron, and then forgot he was LeBron when he got to the free throw line in crunch time. Chauncey reverted back to playing like he put the puke in Tripucka.

Eric Snow found the floor, literally, and went diving for a pivotal loose ball as if he was still spry.

And somewhere along the way “Boobie Time” was created at the Q. LeBron may have even found his (pick one: Bobby Hansen/Steve Kerr/John Paxson) sidekick who will have all the sidebars written about him in the papers if the Cavs can somehow win six more times in the next month or so.

It’s 2-all people!! And if Sheed still thinks that the even the sun shines on a dog’s a$$, he’d better watch where’s he’s pitching his headband during timeouts!

Said LeBron: “I’m more focused than I’ve ever been in my life.”

–My boys T-Gun and E (loyal Clevelanders that they are) happen to be on the road watching our other favorite exercise in sports futility (the Indians) lose a pair in Boston, so I’m under orders to send constant TXT message updates. This will come in handy, when Daniel Gibson blows up, and I can send multiple messages that simply say “BOOBIE!!”

–American Idol “show horse” Melinda Doolittle is on hand to sing the national anthem. She actually has a very nice voice, but I loathe that show. I’ve been to at least three major sporting events in the last year that have featured someone from this inane endeavor. Are we soon going to have to put up with the likes of Cliff Clavin, Laila Ali and Emmitt Smith performing at halftime?!

–It’s not exactly Willis Reed limping out of the tunnel at MSG, but Larry Hughes – partially torn plantar fascia and all – makes it into the starting lineup. This is key, because it allows our man Boobie to come off the bench and enter the game to much fanfare.

–After sub-par games 2 and 3, which even led to their coach calling them out, everyone expects Rip and Sheed to be more aggressive, and they don’t disappoint, going for 16 in the first quarter on 6-12 shooting. Drew Gooden keeps the Cavs in it with 10 of his own.

–The smallest man on the court is fearless! After 5-foot-11 Daniel Gibson drives into the tall trees for the third time, I make it a point to Google and find out where the “Boobie” nickname came from. Turns out it’s just what his mom calls him, which is mildly disappointing. A nickname like that deserves a better origin. Gibson plays the entire quarter spelling both Hughes and LeBron for stretches, while popping off for 11. After a foul by Rip Hamilton knocks him on his a$$, the Q sticks up for their man with a low-grade chant of “Boobie! Boobie!” This chant will echo throughout the Q later (in the third quarter), when Chris Webber commits a hard foul on Gibson and gets T’d up for it.

–As the third quarter opens, T-Gun is anxious for an update, but it’s five minutes into the quarter before I can tell him that the Cavs have added to their first-half point total. LeBron has reverted back to the form that drew all the criticism after Game One, settling for jump shots and making one too many passes. The Pistons play like, well, the Pistons, with Hamilton back to his old self (9 points) and Billups committing just one turnover en route to outscoring Cleveland 24-15.

–Midway through the third period comes this TXT from none other than Farmer Jones: “I think Damon Jones and Donyell Marshall have cost the Cavs 35 pts tonight.” Donyell picks it up to finish the game a respectable 3-5 on FG with a 3-pointer to give him 7 points. He and Jones combine for 7 points in the game.

–Oh, Chauncey! Where is the real C-Bills? A nightmare fourth quarter for the former NBA Finals MVP, as he goes 0-3 from the field and commits three more turnovers. If you’re looking for a lottery play, try out his TO numbers for the series: 7-5-5-5.

–With 6:07 left to play, Pavlovic comes up with a loose ball rebound behind the defense and sails in for a layup to put the Cavs up 80-77, and the Q goes all “Miracle at Richfield.” Everybody and their brother will later call into sports talk radio to describe how frickin’ loud the place was.

–The Pavlovic layup prompted a timeout, during which Sheed is T’d up. Flip Saunders says he was just tossing his headband at the bench out of disgust over … Hamilton? “He was upset with Rip,” Saunders says. “He was upset because he tipped the ball back and he didn’t field it. Rip didn’t know that Pavlovic was behind him and he went after the ball not with full force and Pavlovic got it and gets the layup.” Boobie hits the technical putting the Cavs up 81-77. Gibson and Gooden hit consecutive shots to finish off a 7-0 run that sets up LeBron for a signature ending.

–Up 89-87, every talking head in the sports universe is waiting for LeBron to miss one or both free throws to validate their claims over the last few weeks that LeBron is NOT in the same league as Magic, Michael or even Kobe. Hamilton does his part – whispering something to Bron the way Bron did to Agent Zero before his fatal misses in last year’s opening round of the playoffs. “Nothing really,” Hamilton says of his whispers to LeBron. “Part of the game, trying to stall him a little bit – hopefully he’ll miss a shot. But tonight he stepped up and knocked down two free throws.” LeBron, for his part, admits he stole the strategy that Scottie Pippen once used on Karl Malone, but it didn’t work on him. “I definitely stepped up my free throws,” says James. “It’s something I had to get it over with. … He tried to mess with me, but I’m more focused than I’ve ever been in my life.”