Detroit is cruising and Bowen is kicking 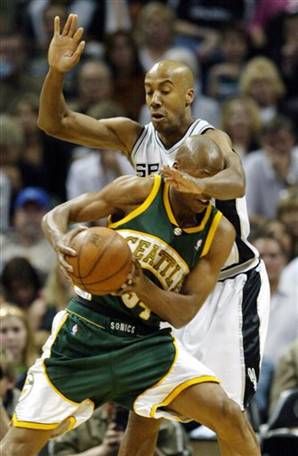 Utah and Golden State didn’t play last night but there was still a playoff game. Detroit took care of the Bulls once again, this time on the road, and the series is over, other than the inevitable fourth win. Chicago has to have set some kind of record for dominance drop-off from round to round. They swept the champs with ease, and now they will be probably get swept after putting up minimal resistance. The Bulls big splash roster-wise was to steal Big Ben from the Pistons. The Pistons “counter” move was to sign Chris Webber off the trash heap. In the make or break game that could have maybe produced a semi-competitive series, Webber didn’t score a point, and the Pistons still won. Big Ben gets some credit for helping the Bulls get to the second round, and I’m sure down the road they can point back to this year as a learning experience for all of their young players.

Now all that’s left to root for is a Cleveland sweep of the Nets, so we’ll have two teams on 8-0 runs heading into the Conference Finals. For all the talk this season about Dallas and Phoenix and their inevitable showdown of the unbeatable, how funny would it be if that were to happen in the East instead? Oh, speaking of Dallas, as Russ pointed out late last night, reports are leaking that Dirk is the MVP. Not much of a surprise, though he unseats the two-time defending MVP. Congrats to Dirk, despite the thousands of jokes there are to make about him. We’ll have much more on Dirk later today.

A big story coming out now is that Amare is calling Bruce Bowen a dirty player. Yeah? Is that so? Here is the visual proof of the latest Bowen attempt at “defense.” You can’t even call it that, cause it’s a guy who was beat on a play just trying to injure someone. Even if Bowen failed in his mission to remove the Suns answer to Tim Duncan, he’s put the thought in Amare’s head that any time he goes up in the air, it might not be safe to land.

Any other player in the league would get the benefit of doubt. But, when you are constantly referred to as the dirtiest player in the game by everyone from Vince Carter to Ray Allen to even Steve Francis, it’s hard to look at that as an accident. Stay away from Amare’s Achilles! Come on Bruce, it’s one thing to body someone up and be physical, but kicking someone coming off surgery should be a suspension at least. I would say it’s worse than Kobe punching Manu with his follow through. Hopefully Kurt Thomas will step in and take care of the Bowen Collector. Amare can’t even do anything about it himself, cause of his importance to the team vs. Bowen’s importance to the Spurs. If Bowen doesn’t stop it, the only way for the Suns to respond is for Kurt to knock Tony Parker or Ginobili out of the series. Nobody wants anymore star players getting hurt. We’ve had way too much of that this season. Clean it up! Clean it up.

The Utah and Golden State series resumes tonight. Thank you!