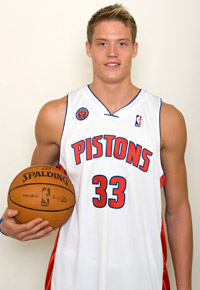 The 39th pick doesn’t normally receive a lot of attention on draft night.

In Sweden, however, Detroit’s selection of forward Jonas Jerebko was big news, and the most devout basketball fans even stayed up until the morning hours (Sweden is several hours ahead of the U.S.) to follow the draft and celebrate with champagne.

Because Jonas Jerebko is a historic player.

Sure, both Maciej Lampe (who played for the Knicks, Suns, Hornets and Rockets between 2003 and 2006) and Damir Markota (a Milwaukee Buck during the ’06-07 season) started their basketball careers in Sweden, but Lampe and Markota left Sweden in their teens and chose to play their national team ball for Poland and Croatia, respectively.

And although Joakim Noah’s mother is a former Miss Sweden, and Miles Simon was actually born in Stockholm (to an American father and a Norwegian mother), it takes a lot of good will to label them as Swedish NBA players.

But Jonas Jerebko is just that.

When deputy commissioner Adam Silver announced that the Detroit Pistons had selected Jerebko with the 39th pick overall, the 22-year-old forward became the first Swede drafted.

And come November, he’ll be the first Swedish player to step on to an NBA court.

“I know that it’s special for all the basketball fans in Sweden. For me it’s just a bonus; it’s pretty cool to be the first one from your country,” Jerebko says. “The draft and my contract signing has generated quite a lot of attention back home in Sweden, but that’s the way it should be. I’m the first player from our country in the best league in the greatest sport in the world. That’s pretty big.”

The sentiment is echoed by Jonte Karlsson, one of Sweden’s most experienced coaches, a former national team coach and now a director at the Swedish basketball federation. “A lot of people thought that it would be impossible for a Swedish player to reach the NBA, but Jonas has shown that a player who’s got his basketball education in Sweden can make it to the League. It’s huge for us,” Karlsson says.

Born and raised in the city of Borås, in the west of Sweden, Jerebko grew up playing soccer, team handball, hockey and golf. Not surprisingly though, it was in basketball that Jerebko excelled. Jerebko’s father, Chris, played for Jim Boeheim at Syracuse between 1977 and 1981, and then moved from his home state New York to Borås to play professionally. There he met Elaine.

And it was after playing for Sweden’s junior national team, in various tournaments in Europe, that Jerebko’s career gained speed. Just a teenager, he received long-term offers from European power houses like Real Madrid (Spain) and Treviso (Italy). Colleges like Syracuse, Boston College and University at Buffalo also showed interest in the lanky, at the time 6-8, Swede with the allround game and the ability to play both guard and forward.

But Jonas Jerebko decided to stay in Sweden.

After graduating from high school, he moved more than 800 miles up north, to join the best team in the country, Plannja. One year later, Jerebko was ready for the Italian league, where he joined Angelico Biella. And after two years in Italy, Jerebko is now ready for the NBA. “I could have played in any league that I wanted in Europe, I don’t think any club would have said ‘no, thank you’ to me. But I want to play in the NBA and I feel

like now is a good time for me to make that move. I’m just as ready as the other guys in the draft,” Jerebko says.

He has signed a two-year deal with Pistons, received his jersey (number 33), got a car and found an apartment in the nice suburb of Troy, just a few minutes away from the practice facility of the Pistons. Now all Jonas Jerebko has to do is to get some playing time…

“I’m a rookie and I’m with a classic franchise with high ambitions; it’s going to be hard for me to get a lot of minutes, that’s a no-brainer. But I’m working hard on my game and I’m willing to do everything I can to show that I belong here,” he says.

Before the draft, a lot of scouts labeled Jerebko as a typical European tweener. Was he big enough to be drafted as a power forward? Were his ball handling skills good enough to place him in the group of available small forwards? Apparently, the Pistons saw potential in the 6-10 (in his shoes), 231-pound (he bulked up more than 30 pounds of solid muscle during his time in Italy) Jerebko, who never averaged double-digits in points in Italy, but gained a reputation as a defensive specialist.

His athleticism and ability to defend against both perimeter and post players, combined with his team-oriented attitude, made him a valuable player for Angelico Biella. A team that surprisingly advanced to the semi-finals of the Italian league, in large part thanks to Jerebko, who filled the role of a “doing a little bit of everything” kind of player.

Karlsson says the ability to do a lot of different things is what sets Jerebko apart from other players his age. “His greatest strength is his ability to adjust. If you tell him to play center, he’ll get you the rebounds you need. If you tell him to defend on a shooting guard, he’s all over him. If you tell him to clean the stands before the game, he would do that do. Jonas is a phenomenal young man with a great work ethic,” Karlsson says. “And I don’t think people should focus to much on his numbers in Italy. Sure, he didn’t average more than 9 or 10 points last season, but he could have had 20 a game if they would have run plays for him. He can score if that’s what’s asked of him, but he’s no flashy player who cares more about his stats than the team. Jonas is a very unselfish player.”

In Sweden and Italy, Jerebko tried his hand at every position from one to five, and he says he’s ready to do that again.

“Honestly, I don’t care about positions, I’ll play wherever the coach tells me to. In basketball today you can’t say that you’re just a guard, just a forward

or just a center,” Jerebko says. “I’m working on my game everyday, trying to improve my ball handling and my shooting. I know what it’s all about: You have to work hard when you get the chance and you have to knock down those open shots.”

And with a healthy dose of self confidence, Jerebko is ready to show that the NHL isn’t the only league where Swedish players belong. “It’s kind of funny that I wound up in Detroit, where there’s like seven or eight Swedish players on the Detroit Red Wings squad. I’ll have to get in contact with them and go and see some games,” Jerebko says. “But of course I think it’s a lot bigger for a Swedish basketball player to make it in the NBA than for a Swedish hockey player to get to the NHL.”

And make no mistake, Jonas Jerebko is intent on not just playing in the NBA. He’s there to make an impact: “I might have surprised a few people just by making it to the League. I think I can surprise them again.”